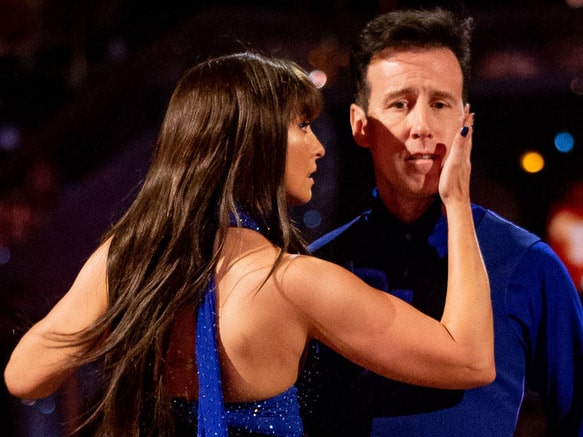 With the competition getting ever closer and the coveted landmark, Blackpool, just around the corner, ‘rollercoaster’ is certainly the word when it came to our week 7 dance: the romantic Rumba. Perhaps the most challenging of all the dances, Emma and I hoped our scores would keep climbing after the solid performances of previous weeks, but hadn’t anticipated taking such a big dip!…

As we started our training for this new dance, we were mindful of comments from the judges in recent weeks regarding the chemistry and connection in the performances – or rather, the lack of it, in their eyes. We took this firmly to heart, and with a Rumba up next, this dance of love offered us the ideal opportunity to focus on these aspects and do our very best to show the judges how we could improve.

Connection and chemistry aside, there was still much ground to cover in the technique of this dance, too – and if ever there was a dance for stepping outside one’s comfort zone, it’s the Rumba. Emma, as ever, was up for the challenge!

Now, the Rumba isn’t everybody’s cup of tea. It requires much sensuality, a continuous flowing motion from step to step, phrase to phrase, with the careful shifting of weight from one leg to the other to to help create the coveted Cuban motion in the hips. As always, the devil’s in the detail too, with a sinuous action from tips of toes caressing the floor, to the graceful placement of fingertips! So much technique involved, so much to learn, and so much to concentrate on until the dance becomes second nature.

As it happened, show-day nerves did creep in and I’m sure Emma won’t mind me saying that those marvellous legs of hers had gone to jelly after our last run-through. It’s such a shift going from the training room to the studio and in such a slow, exposed dance, the slightest fault or unsteadiness will be magnified – especially to those looking for it. 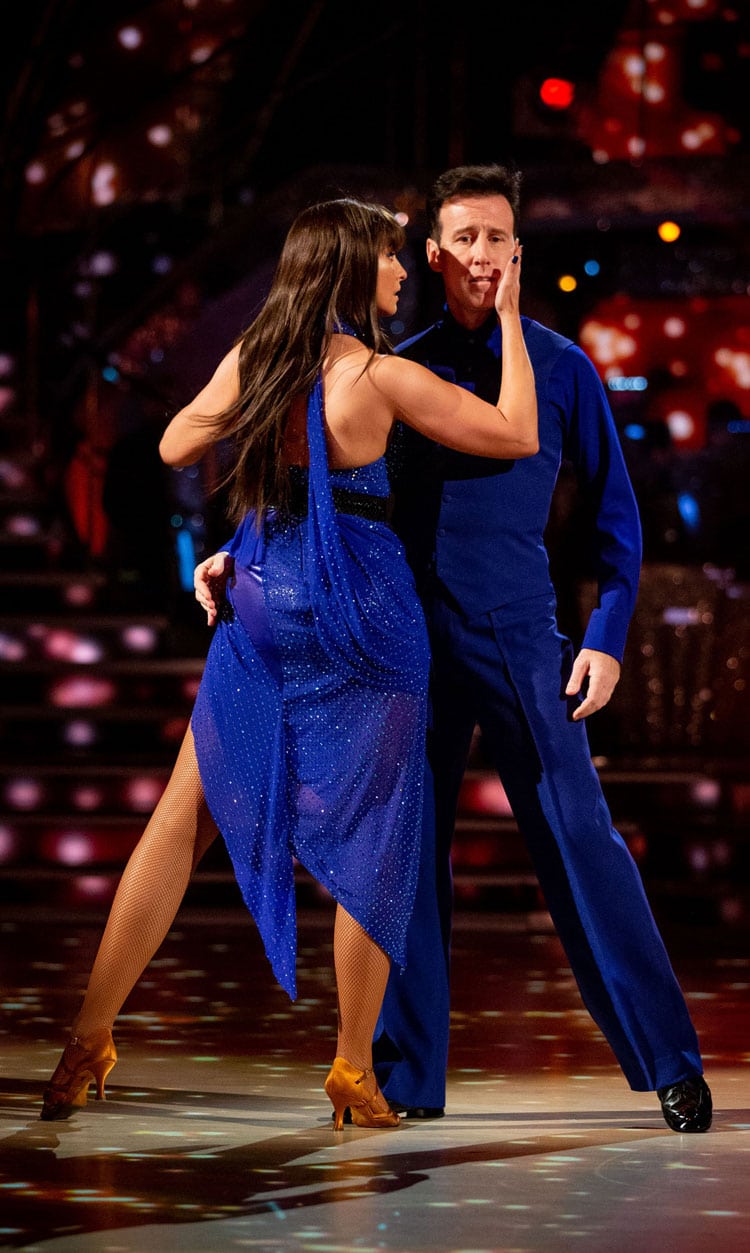 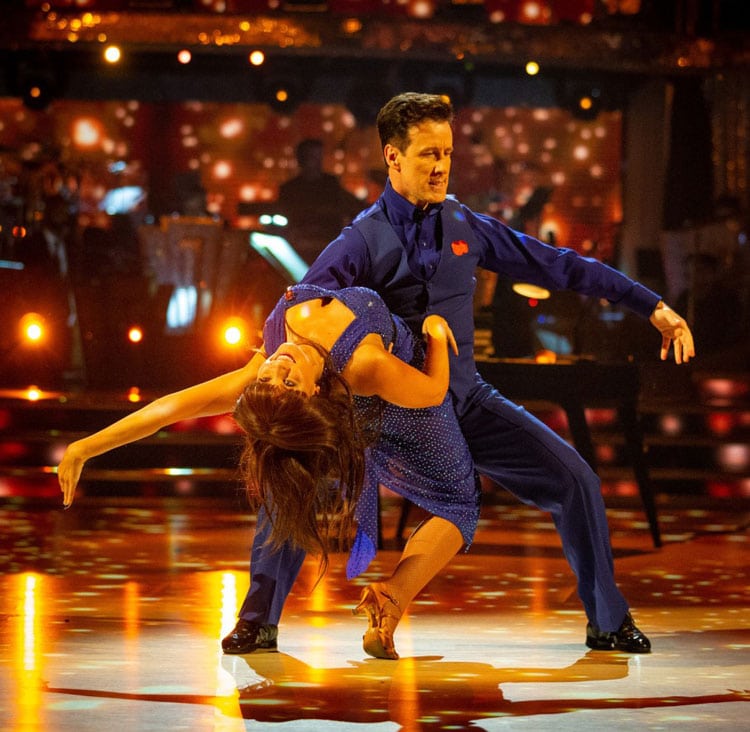 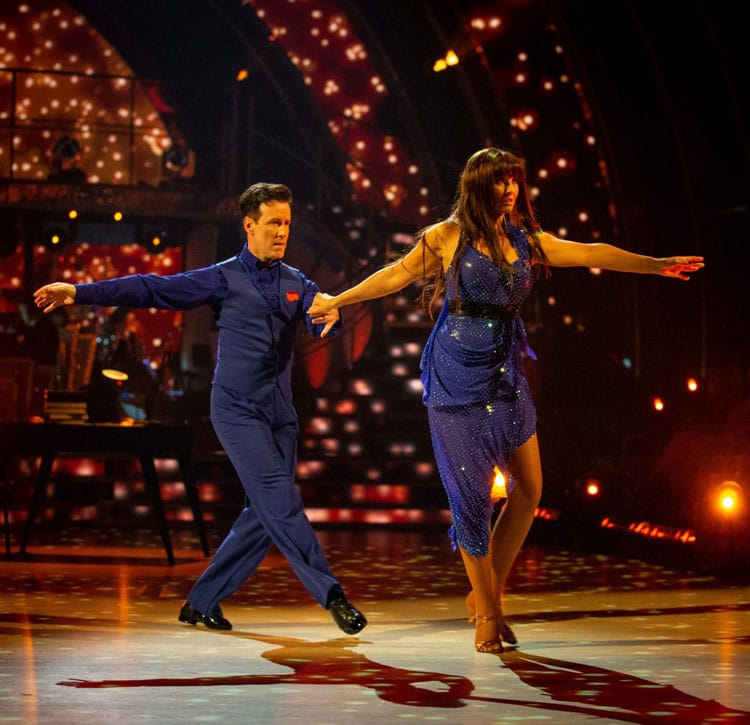 Our dance went beautifully, to my mind, and felt incredibly moving indeed. I so thoroughly enjoyed it, and was sure that our efforts to convey chemistry would cause a positive reaction. For even more dramatic effect we’d been able to include the most marvellous développé – a move which arose quite by chance in training when Emma’s leg sprung up as though a doctor were testing her reflexes! “We’ll have that!” I said – in wonder at such balletic ability – and she delivered it like a pro on the night!

She is a Woman in Love with the Rumba, and we're right there with you @EmmaBarton. 💜 @TheAntonDuBeke #Strictly pic.twitter.com/WU0eQGCVUh

Our dance, to the Streisand classic ‘Woman In Love’, had passion, intensity, a sensuous storyline, and without doubt: chemistry. As the music drew to its close, the pair of us, in our matching midnight blue get-ups, arose from the final clinch to see a true vision of beauty: the audience on their feet! 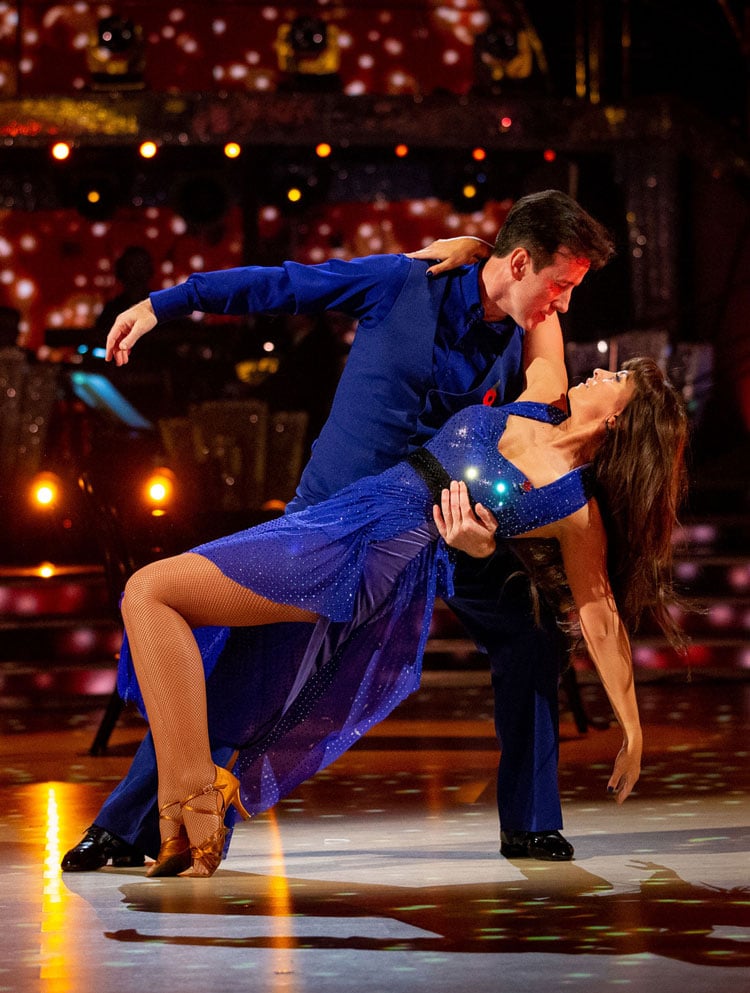 The judges, however, didn’t share this appreciation. Without labouring, they all agreed we looked the part, but there wasn’t enough Cuban rhythm for Bruno – though he said we painted wonderful pictures, and Shirley took notable issue with timing. Then, although raising concerns over the free-hand and balance, Craig came to our rescue commending Emma’s développé and the storytelling. Some welcome acknowledgement, at least, for the hard work and progress this week!

It’s a difficult dance, that’s for sure, but the scoring did come across as somewhat harsh: fives from Shirley & Craig, sixes from Motsi & Bruno. 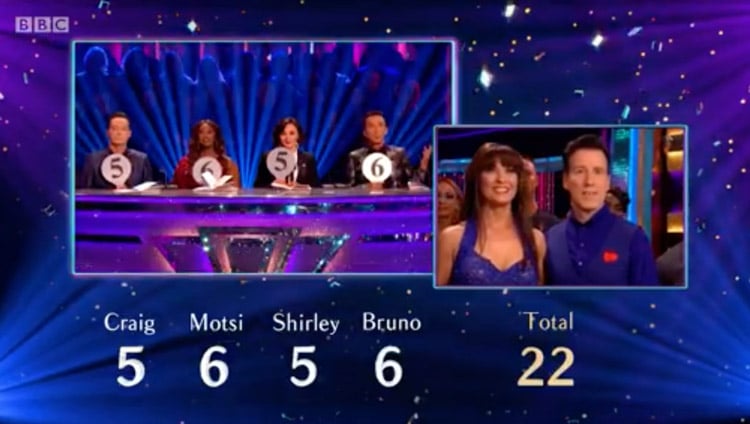 This had not gone at all to plan, and totalling 22, placed us squarely at the bottom of the leaderboard. Our hearts, once full from the thrill of the performance, had quickly sunk. We really thought our number was up. 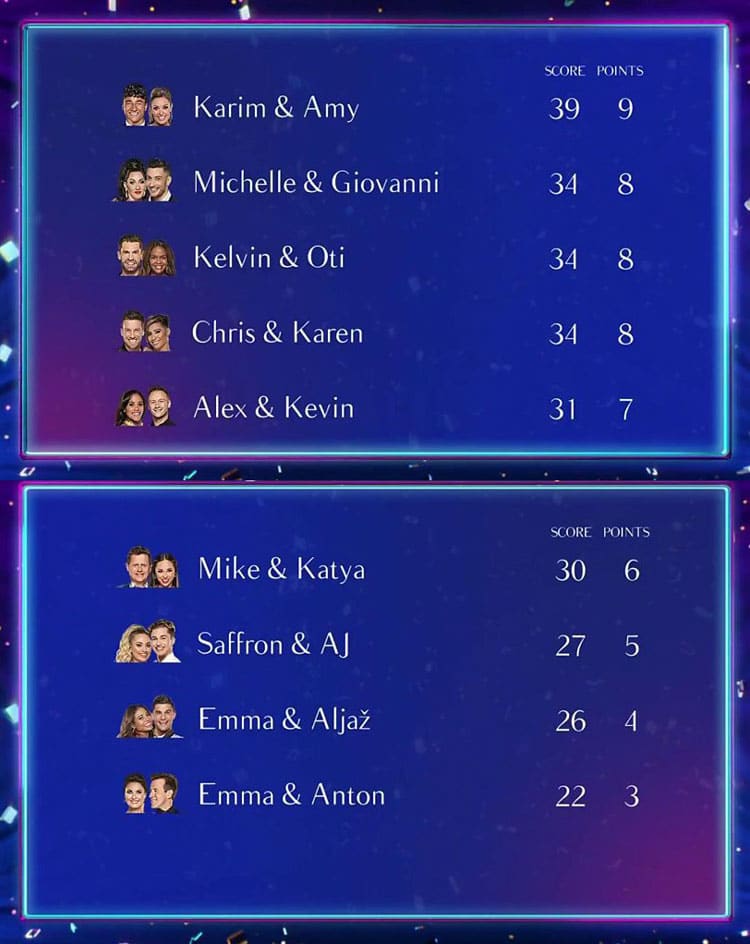 “I thought it was marvellous!” Despite their scores, @theemmabarton and @mrantondubeke loved dancing the Rumba tonight. ✨ #Strictly

I could say, “Imagine our surprise” when we found out we’d made it through… but no need – it was all captured on film in the Results Show! You can see what I mean in this clip from It Takes Two this week…

Our safe passage to week 8, my loves, could only have come about through your kind, generous, and clearly numerous votes! Votes for which Emma and I are truly grateful – thank you very much indeed! We were overjoyed to know that the viewers enjoyed our Rumba so much that it won their hearts. It was a wonderful boost for Emma, and we’re both thrilled that we’re able to dance again!

Of course, that meant couples who placed higher on the leaderboard were now in jeopardy and this week the red light landed on Mike & Katya once again, along with Emma W & Aljaz. The judges found Mike’s to be the better performance in the dance-off, and our charming and delightful Viscountess had to take to the floor for her very last dance on Strictly.

This week, I feel the tides have turned in our favour. Emma has had more time for rehearsals which has been a real boon, but most marvellously, our dance is a Couple’s Choice… Theatre/Jazz. And yes, it really is as exciting as it sounds!

Playing to Emma’s strengths, and with more time for rehearsal, I’m confident she’ll be able to master the technical and the emotional halves of the dance – the steps and the character – allowing her to become confident in the performance. She can then banish the nerves and deliver a real showstopper on Saturday night. I, for one, can’t wait for you to see it!

If you saw It Takes Two last night, you’ll have been treated to a glimpse of us in training for Ian Waite’s eagle-eyed scrutiny… and I’m delighted to say he loved it so much he gave Emma his Gold Star for best progress this week. My chest swelled with pride, and it was perfectly timed praise in the wake of last weekend.

Strictly really is a rollercoaster – we’ve had a dip but we’re back on the up …and the Tower’s in sight!

Here’s to this Saturday, my loves! Tune in to BBC1 6.50pm… and have your jazz hands ready!