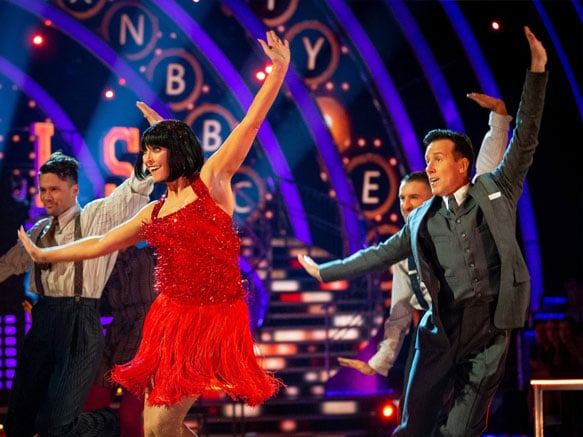 Well, what a roaring success! The Charleston is a dance full of joy – it’s cheeky, packed full of character, can take a degree of comedy, and generally goes like the clappers! Dancing this in week 11, the quarter finals, with a semi final place at state, this was no time to get into a flap – we were determined to bring the Twenties to the dance floor… and tens to our score! 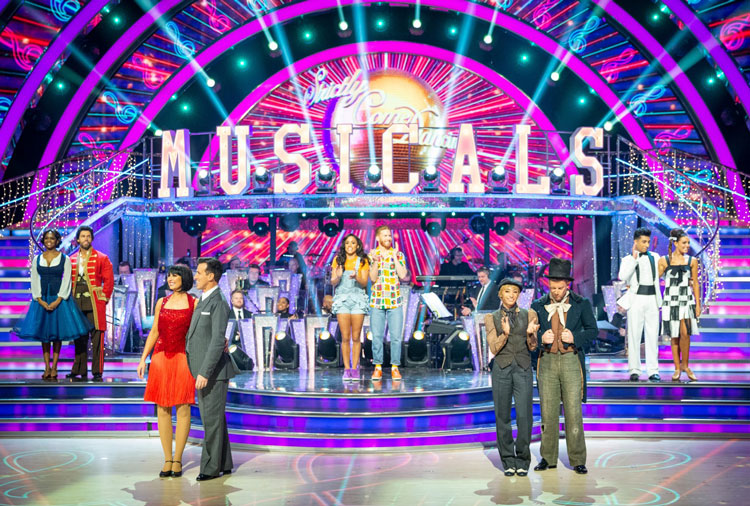 Ah, musicals week – what a thrill! From start to finish this was a top-billing evening of entertainment – just my cup of tea – and I had the very great honour of both opening, and closing the show! The night got off to a rollicking start with a group number featuring yours truly and Kevin from Grimsby delivering a song at the start of wonderfully choreographed medley! A stand-out number in itself… but in effect the overture to the main event – the Strictly Quarter Final… with 5 couples giving their all to reach another week closer to that coveted glitter ball! 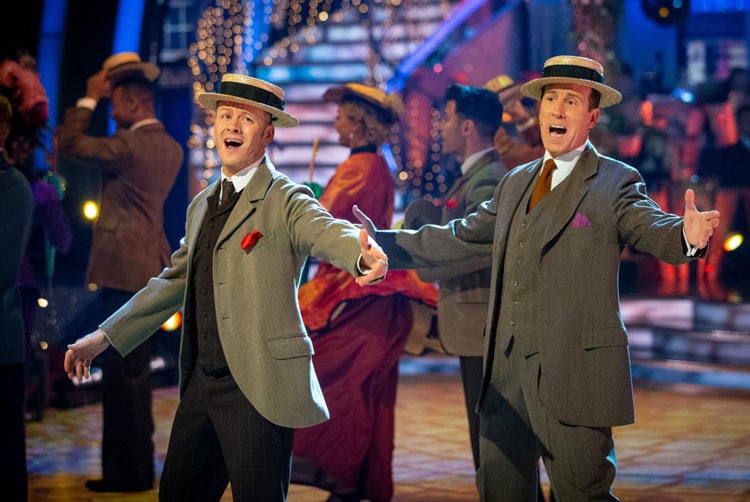 There’s no denying this week’s rehearsals were exhausting, but I have to say, we had such fun learning this routine! The classic 1920s Charleston is pure exuberance, and both Emma and I were thrilled to be dancing this at this point in the competition. It certainly played to Emma’s strengths and as soon as rehearsals started, I knew this was going to be a terrific number.

Practise, practise, practise – everything had to be perfectly timed – the synchro sections, the swivels, the kicks, the spins, arms, hands, feet – and expressions too! Emma was determined to get a positive reaction from Craig and worked so hard to make this her best dance yet. 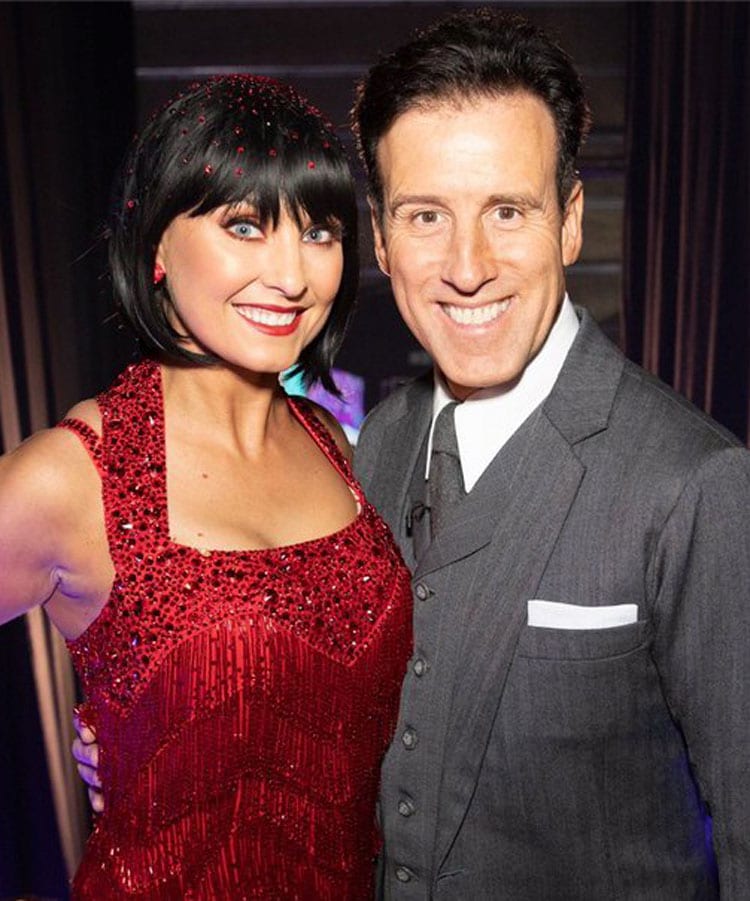 Her hard work certainly paid off. Everything came together perfectly on the night from start to finish in such tremendous style. From band call, to dress run, to the live show, she had the dance off pat and each run through was more exciting than the last. Especially with the extra dancers too – a real team effort ensemble number – just like in the musicals – we were putting on a show!

The routine was packed with content, and with its speed, like the Quickstep the week before, one wrong move could throw a section out of step. But with Emma’s steadily improving technique and growing confidence, such slips were a thing of the past – plus, it’s the quarter finals – these were risks worth taking! 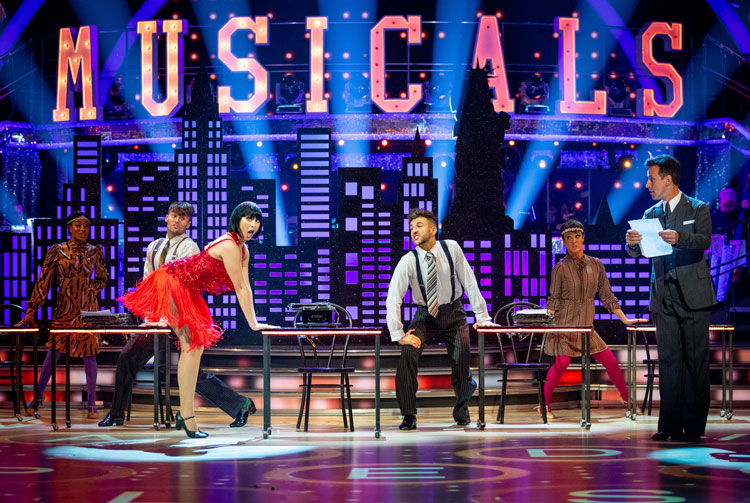 Emma lit up the floor – she lit up the entire studio! The hair, make-up, costumes, music, staging, everything in fact was marvellous and took us right back to 1922, the height of the New York jazz age, with Millie and her typing pool boss, Graydon, in fabulously high spirits! Emma quite rightly stole the show for me – this was her dance, and she gave it everything! 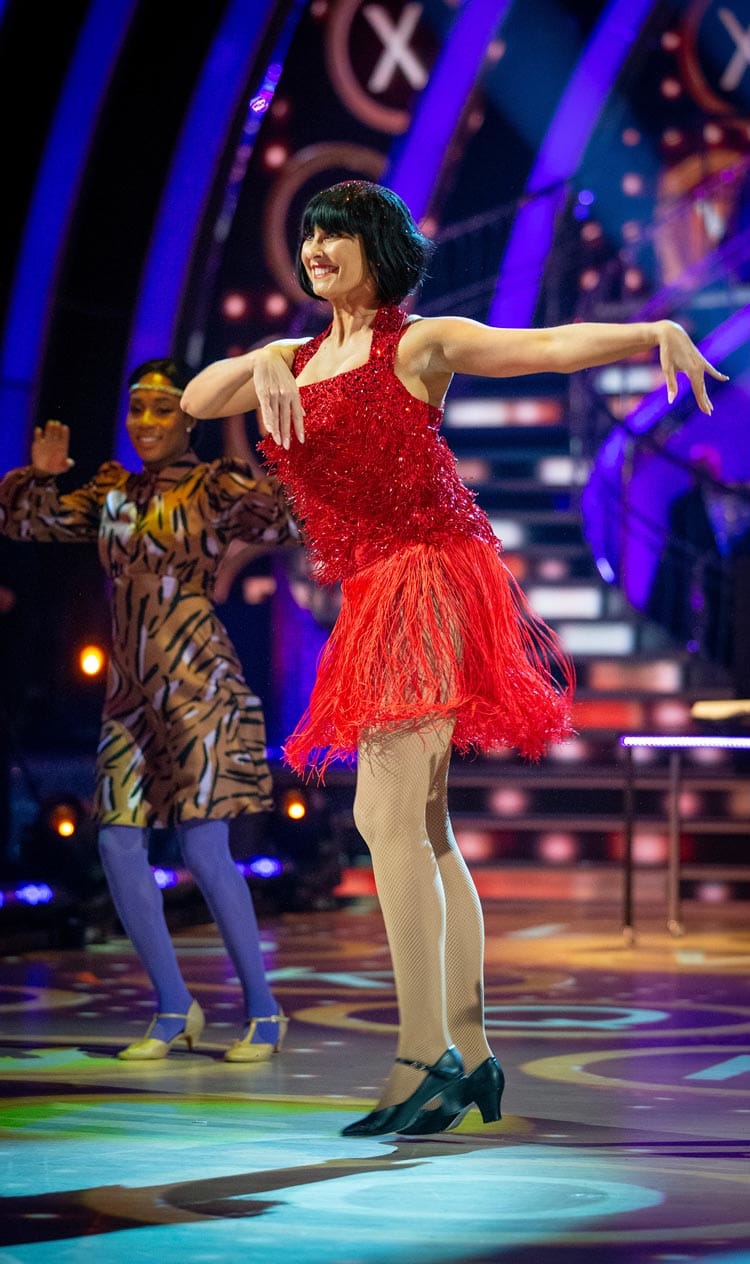 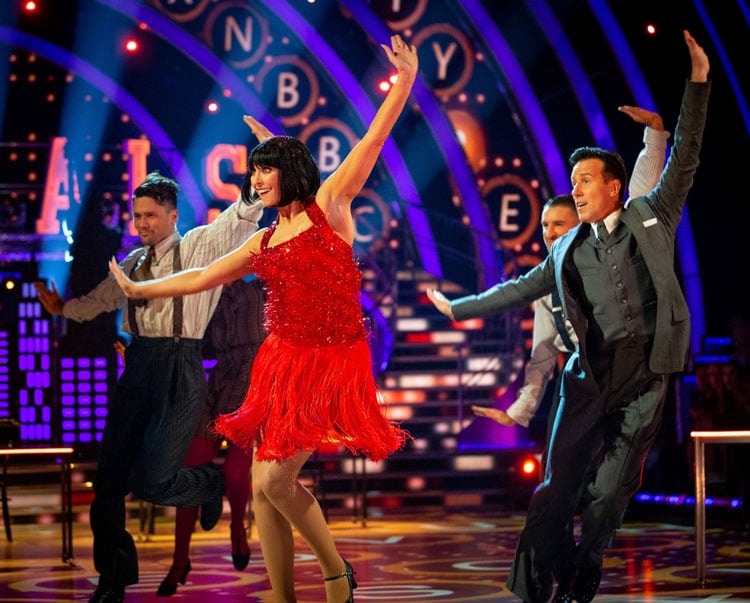 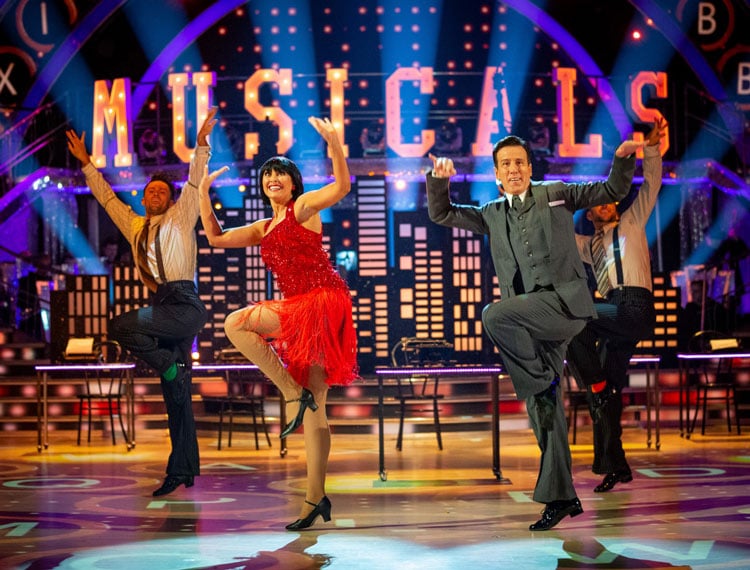 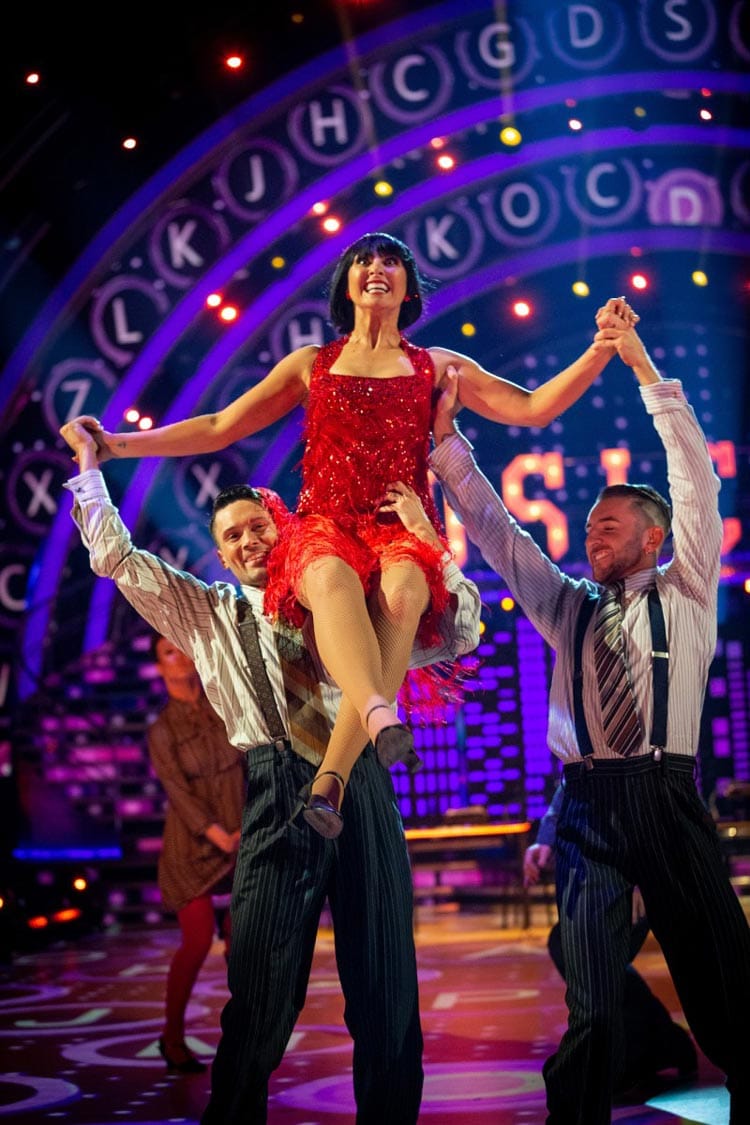 To reach the end of the routine in time, on time, and having been in sync throughout with ne’er a step out of place, at this stage of the competition is certainly by skill and not luck – the audience knew this – and were on their feet in rapturous applause!… As were three of the Judges!

What a way to close the show! It felt tremendous, and I could tell from Emma’s beaming smile that she’d enjoyed it just as much as I’d hoped she would.

The judges I’m delighted to say, couldn’t have been more complimentary, Shirley even wagering Emma was a contender for the Final: “Personality, authenticity, delivery, footwork – fantastic!” Bruno said it was a true classic Charleston pitched perfectly and loved our Josephine Baker step, too! Motsi said it was the icing on the top of a fantastic evening, and Craig, bless him, gave Emma the ‘Fab-u-lous!’ she’d been hoping for all along! What a triumph!

We rocketed up the stairs and were so very excited for ours scores. Now there’s a first! When Craig announced his 9 this broke yet another record for me… and I knew this was going to be good. Neither of us expected the three tens that were to follow! Three tens!… All in one night!… Thirty nine! Highest ever score, 1 shy of perfection… and the most wonderful commendation for Emma. 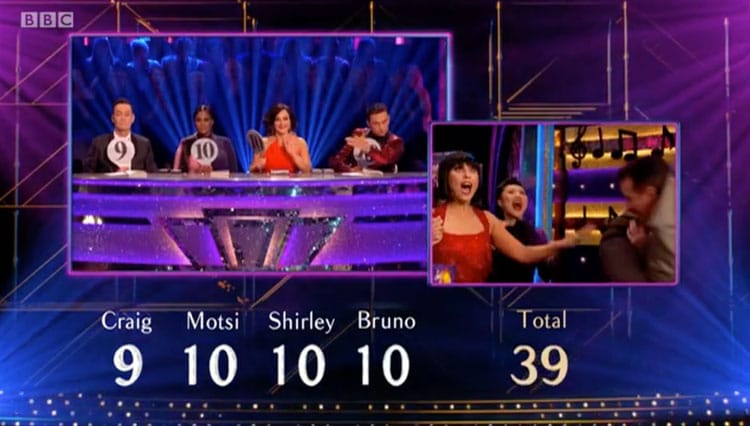 It’s fair to say @theemmabarton and @mrantondubeke are happy about those three 10s for their Charleston! #Strictly

Emma had danced her heart out… and won those of the judges in return!

This placed us third on the leaderboard overall, as near to the bottom as to the top and so our elation quickly gave way to trepidation as we knew how vital the public votes would be. 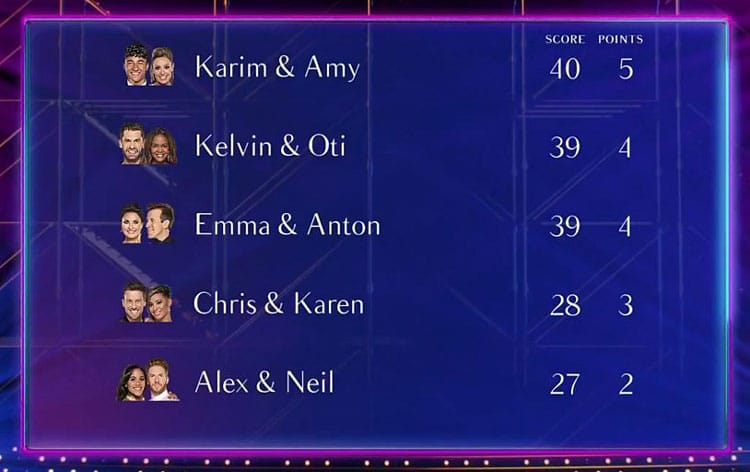 We understood there was a technical glitch with the online voting, so all the couples really were on tenterhooks not knowing how the final scores would play out. With so few couples left, we knew it could be any of us in the dance-off – we were all at risk.

And so, when Tess called out our names as being through to next week, we were beside ourselves with joy – what a tremendous result!! Knowing how the leaderboard can turn on its head when votes are combined, we are both so hugely grateful for your support – every single vote is vital when it comes to the crunch. Once again, sincere thanks, my loves, this is all simply remarkable!

Of course, the night didn’t end so well for one couple. The dance-off this week followed the main show’s leaderboard with Chris & Karen and Alex & Neil dancing for the last place in the Semis. And what wonderful reprises they both gave of their performances for the judges. It was a close call, the first fully split decision of the series I believe, but with the Head Judges’s casting vote, Alex & Neil took their curtain call and stepped out for their final dance on the Strictly dance floor. What a fantastic competitor she’s been, just wonderful to watch this sportswoman blossom into such an incredible dancer! Hats off to Neil too in his first series as a partnered pro!

The pressure’s well and truly on now as we prepare for the Semi Finals. Two different dances in one night – for us, a Waltz and a Cha Cha Cha. There’s going to be a battle on the ballroom this Saturday for those places in the Grand Final, that’s for sure!

Tune in, 7pm tomorrow to watch it all unfold… meanwhile Emma and I will be on It Takes Two tonight at 6pm too with all the scoop on this week’s training.

Counting on your support once again, my loves, that glitter ball is so very, very close!