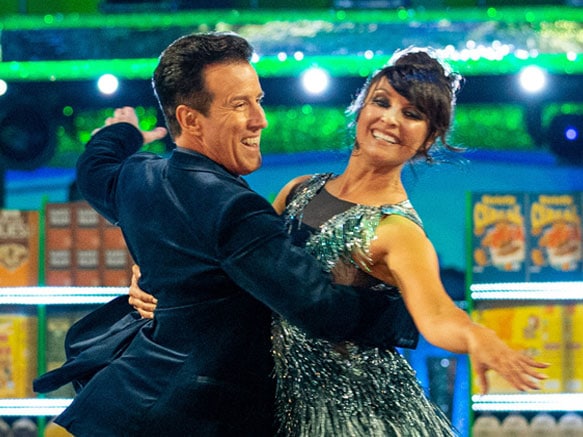 Strictly Come Dancing is back on our screens for its seventeenth series and may I say I’m overjoyed to be taking part once again and having another shot at the ever-elusive glitter ball! Moreover, something in my waters is telling me this could be a very special series, with everything to play for. As you’ll know, we’re already off to a rocketing start, so, positions everyone… let’s dance!

It all kicked off just over two weeks ago with the BBC pulling out all the stops – and more – in devising the most marvellous launch show to get the nation’s feet tapping. With spectacular group dances featuring us Pro dancers holding court along with the quintessential Queen of Pop herself – Kylie Minogue…

…and later in the show, a true feat of choreography as our 15 celebs – the Class of 2019 – joined us all in the most tremendous group finalé.

Each of these a blockbuster performance in itself, the night’s main event was of course… the pairings! I’d been posting the celebrity announcements on my social media channels as they were released over the days prior, so everyone was up to speed on this year’s line-up of hopefuls. In order of announcement…

A fabulous assortment of leading lights from such a diverse array of fields! Quite how their respective expertise will translate to the dance floor… well, the coming weeks will tell!

Naturally, speculation abounded as to who would be partnered with whom, not least on my part! As you’ll recall, my time on the show was so very short-lived last year and I’ll admit, my heart was in my mouth as this year’s pairings began. I had my inklings – we all did… but you don’t need to imagine my surprise when Tess announced that this year I’d be dancing with Honey Mitchell from Eastenders, a.k.a. the magnificent Emma Barton!

That moment when you're paired up with a #Strictly legend…

Not to diminish my achievements with previous partners – having reached the final with the sparking Katie Derham in series 13, the semi-final with lovely Lesley Garrett in series 1, and regularly reaching week 8 or beyond with a number of my celebrity belles – it came as something of a shock to be paired with someone I’d considered from the outset to be capable of reaching the final! What a result!… And the competition hadn’t even begun! 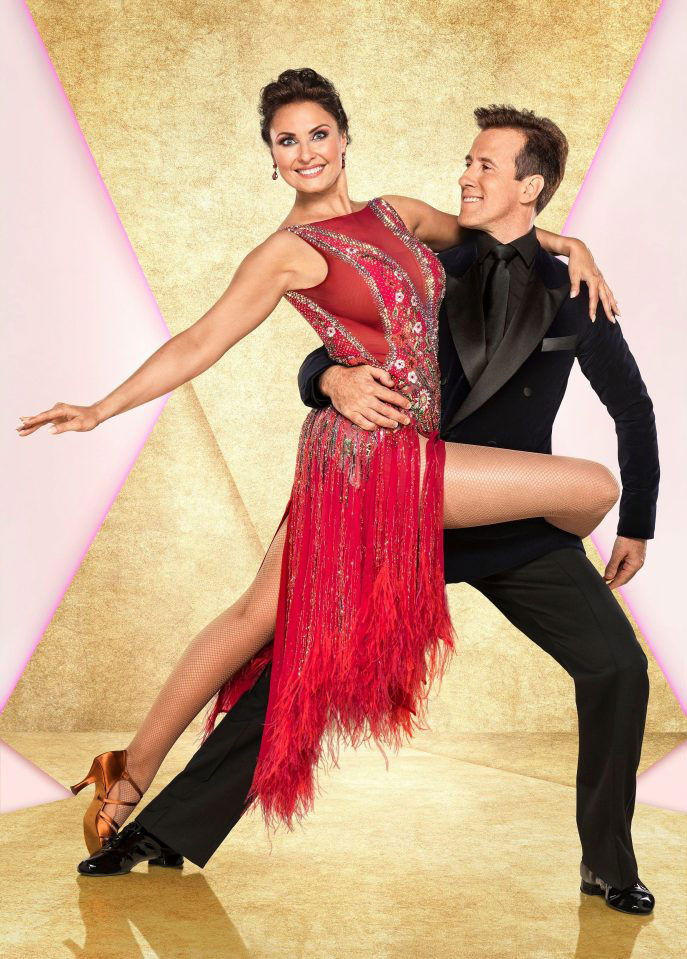 Now, bear in mind that Emma has her day job of running the Minute Mart on Eastenders – with cliffhanger storylines to boot – fitting in a strenuous dance training regime was going to take some planning… along with regularly scheduled hot-beverage-and-bun breaks for sustenance! Not least as our very first dance was to be … the Jive.

"I can't imagine things going any better." @TheAntonDuBeke is seriously impressed with @EmmaBarton's #Strictly progress. Or it could just be the Jive talkin'
" pic.twitter.com/lrjLCYQZns

The Jive, as we all know, is something of an energetic dance! Fast paced, technically challenging, demanding of rhythm, precision and stamina – it’s not for the faint of heart! Ideally braved later in the competition, we were straight in at the deep end, it really was sink or swim.

Such were the exertions, that at one point I resorted to wearing shorts – which when broadcast in the VT on the live show, became something of an internet sensation in itself.

Nevertheless, it quickly became clear that Emma was a natural and I was able to craft a routine packed with content to enable her personality, ability – and gleaming smile – to shine through.

I knew she’d be brilliant… and indeed, she was.

On the night, last Saturday, the running order placed us last in the line-up. Fifteenth to go on. This, you’ll appreciate, can have the unsettling effect of magnifying one’s nerves – and my reassurances of saving the best till last became less and less effective watching 14 other stupendous routines play out before us. I felt for Emma – this really had been a marathon week and the adrenaline can only last so long.

And then, finally, we were on. I, cover-star pin-up of the Minute Mart’s latest celeb gossip magazine, saunter in to pick up a few essentials and Emma, the eagle eyed assistant clocks me, sashays over, and wastes no time in erupting into a jive! Powerless to resist, it’s off with her tabard and we rocket round the aisles faster than a supermarket sweep.

The tabard is off and the Jive is ON! Fantastic kicks and flicks from @EmmaBarton and @TheAntonDuBeke. #Strictly pic.twitter.com/EndKZEzRaz 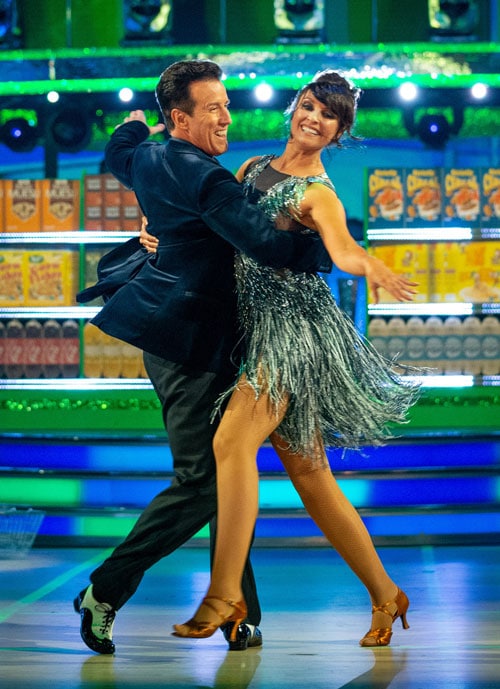 That was one fast jive! …And Emma didn’t just keep up, she really sold it! Sass, synchronicity, showmanship – Emma had them all! I couldn’t have been more proud of her, she was truly brilliant, and delivered a sterling debut performance on that dancefloor.

As for the judges, well, Craig felt it was “laboured” but did concede that Emma has “amazing potential”. Our new judge Motsi, was far more appreciative – “great posture, great legs, controlled arms” and said that with “more of the good stuff you’re going to be splendid.” Marvellous, constructive, and encouraging indeed – Motsi gets my vote! Shirley wasn’t quite so agreeable, unhappy with Emma’s posture, connections, and technical elements, summing up with “otherwise quite nice,” – though she did acknowledge Emma as “a natural born performer.” Bruno, ah Bruno… “Yes, a few issues, but a wonderful crowd-pleasing performance.” We’ll take that! A generally positive end to a mostly positive critique. (I’ve known far worse!)

When the scores came in: sixes each from Craig, Motsi and Bruno, and a five from Shirley, giving a total of 23 points, you didn’t need to be a maths whizz to tally-up three weeks’ worth in one, based on some past years! We placed 7th out of 15 – a very solid start, not bad at all… with plenty of room for improvement. We are, after all, planning on playing the long game this year! 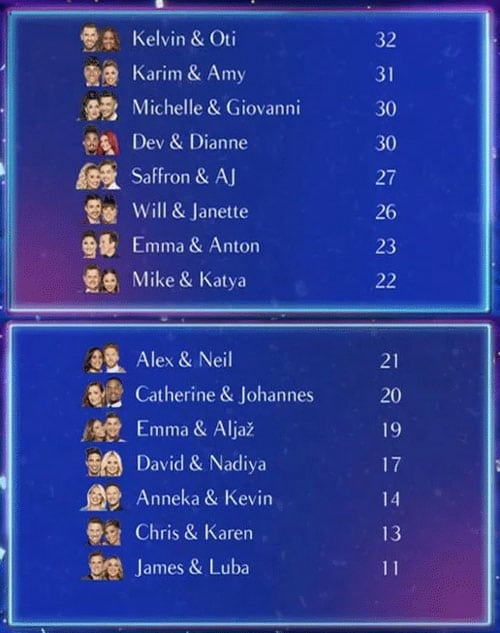 All told, what a fantastic night. This really is going to be a closely fought competition, but I’m very much of the opinion that #TeamEmton is firmly in the running!

Now, for week 2 – the first of the elimination weeks – we’re dancing my all time favourite: the Foxtrot. This has to be ballroom at its best. It’s a big shift from the jive – there’s a lot of new ground to cover technically but Emma’s doing tremendously well in training and our performance is going to be pure class. I can feel that in my waters, too!

Make sure you’re tuned in from 6:40pm on Saturday night, my loves, and we’ll see you on the dancefloor – and don’t forget to vote!