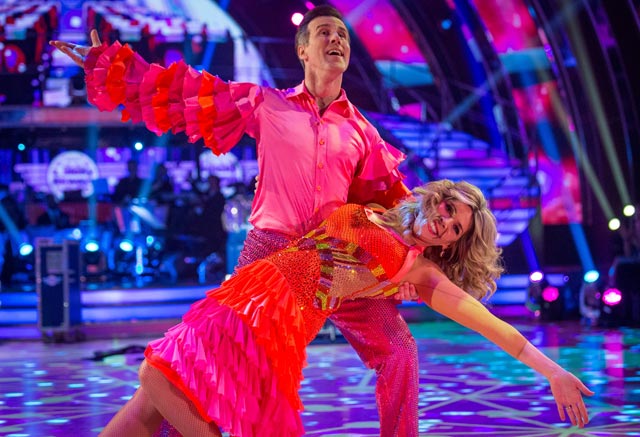 Final call for Strictly Airlines on a flight of fancy, a journey into the unknown… and a ‘send-up’ according to Craig! But would our in-flight Samba to ‘Love Is In The Air’ earn us our wings and land us a place in next week’s show?

After the thrilling success of our Tango last weekend, we were very much on a high… but as Ruth mentioned in the VT, brought straight back down to earth on the Monday morning when we had to put that dance firmly behind us and learn a whole new dance from scratch. Strictly really can be a bumpy ride for our celebrities. Ruth, I must say, is handling the weekly turbulence incredibly well indeed and going at it full throttle!

We had a great week of training, as seen in Ruth’s video clips – the Samba is such a fun dance and we could barely stop moving to the music…

Back to being a beginner again! Working my little socks off to learn the Samba….it's harder than it looks! @TheAntonDuBeke @bbcstrictly pic.twitter.com/TusFo0Kw88

…and with our fabulous in-flight-entertainment theme for our sky-high Samba, we were lucky enough to visit a British Airways training centre where Ruth was given some top tips on sliver service and smooth trolley action from the pros!

Good luck @RuthieeL and @TheAntonDuBeke! It was our pleasure to help you get into character for this week’s dance @bbcstrictly #Strictly pic.twitter.com/rfVswHBkA5

Then, all of a sudden, we were airborne. Cruising at 30,000 feet, I was reading my newspaper when the opening refrain of ‘Love Is In The Air’ drifted down the aisle with Ruth, her trolley and her Farrah Fawcett hair, and I knew this was no ordinary in-flight service.

First Class indeed! Our eyes met, seat belt off, we circled the drinks trolley, and then the flight was ours and we took it to an altogether new destination!

Garbed in a fetching 1970s cabin crew uniform, and I in a trademark suit and tie, perhaps it was the altitude, or perhaps it was the sheer joy of the moment… we felt compelled to whip them off to reveal outfits we’d clearly been saving for a carnival at Copacabana Beach. What a sight we must have been to behold! And how I managed to keep my sleeves tucked inside my jacket I’ve yet to fathom. Those sleeves – there was so much movement going on at times it felt like a group dance! Apparently they mesmerised the viewing audience, according to the Radio Times. They were the perfect match to Ruth’s dress, it’s truly a wonder we could concentrate with all the frills going on!

A truly exuberant performance. You could see the glee in our faces as we travelled around the dance floor like the life and soul of the party. Reverse rolls, hip action, horse & cart, we had it all! I thought Ruth absolutely captured the spirit of the dance and gave a tremendous performance – she really is my high flyer!

As we glided over to the judges, walking on air after such an uplifting dance, were we in for a smooth touchdown, or should we be bracing ourselves for a bumpy landing?…

Craig began with “Well… I thought I was at the Pan Pacific Grand Prix with Doug and Shirley from Strictly Ballroom back in 1950. I’m unsure how to judge it as it was a ‘send-up’ – I know it had samba in it…” A ‘send-up’? I wasn’t going to let that slip by, so I chipped in “It wasn’t a glancing nod to a samba, it was the real McCoy!” The audience erupted, then Craig continued… “I loved it for its comedy and its showbiz, but not its technique.” We’ll take the first two and you can keep the last! Send-up? Good lord!

Then Darcey: “Slightly over the top but you came alive on that dancefloor. This crazy side – you were having fun, you were energized… Fabulous!” Marvellous – Darcey can come to our party next time! Shirley had got the measure of the dance: “Brilliant concept – definitely a parody from 1976. Difficult reverse rolls but Ruth kept up. There was Samba content and I thought the concept was fantastic.” Hurrah… always good to impress the head judge!

That was so much fun!! 😃 Well done Ruthie. So proud of you once again. You were brilliant! #samba #shirt #costume #dance #scd #bts @ruthlangsford

The scores, well, I’d have personally marked higher for flamboyance and costumery (wouldn’t you?!), but alas, some things don’t seem to change… Fives from Craig and Darcey, and a welcome six from Shirley for a total 16. For the first time in 15 series I’m disappointed Bruno wasn’t there – we could’ve done with an extra 4!

Due to his absence from the judging panel this week, the scores were out of a total 30… and it caused a bit of a jam on both halves of the leaderboard with four couples tied at 24 and four couples tied at 16. That of course included us, and I can only presume for alphabetical reasons, Ruth and I found ourselves at the very bottom once again. Oh dear. That was a crash landing for our routine, that’s for sure. Would your votes be the life preservers we needed? Doors to manual… was this our exit? The Results show was a tense affair. Well, I say that, it’s always a tense affair but more so this week as we were left til last before finding out that we were saved. My goodness me, those few seconds felt like an eternity waiting for names to be called. It never gets any easier.

But of course, there was a dreaded dance-off, and this week it was between Simon & Karen and Brian & Amy. Both such wonderfully entertaining couples and they both performed with such confidence and enthusiasm the second time. Rules, however are rules, and judges are the judges. Both Craig and Darcey chose to save Simon and so Brian & Amy were out of the competition. What a sad loss for the programme – Brian’s wit was a true asset to the show, as well as to all the celebrities’ camaraderie and morale too. Let’s all hope he keeps dancing!

For this coming weekend, we’ve the fabulous Quickstep, and it’s to the theme of Bewitched – there should be plenty of tricks and treats in store for Saturday night (not least from the hair, makeup and costume departments!). Whilst I’m on the topic of treats… here’s another one for you! I’ve this week announced the release date of my debut album! (Haven’t I been a busy boy!) I’m very very excited indeed about it – it’s called ‘From The Top‘ and it’s a wonderful collaborative album of 17 tremendous tracks – such fabulous tunes, I can’t wait until the 24th November when it’s properly released. In the meantime, you can find out more about it here on my blog, and pre-orders are being taken so you can reserve yours and receive it as soon as it’s available!

There’s also a competition to win a lesson with me, too! See the blog post for more details on that.

Until the weekend my loves,