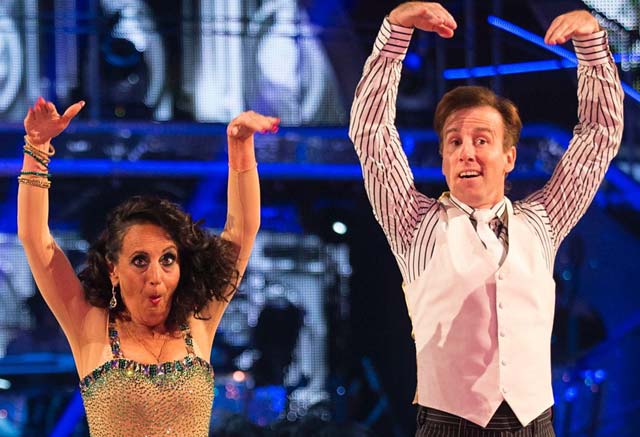 From ‘Birds of a Feather’ rehearsals, to soaring as my Maltese Falcon, Lesley truly took flight this week!

As many of you will already know, Lesley is recording a Christmas Special of the hit show ‘Birds of a Feather’ at the moment, and last week, as if our combined schedule wasn’t hectic enough, the ‘Birds’ had to film on location… in Malta! A hardship indeed, but I of course had to join them… after all, we had a Charleston to learn!

Now, admittedly, we couldn’t be dancing all the time and though there were delightful amenities and facilities all on hand… rest assured, whilst Lesley was filming, I was thoroughly occupied with creating and refining the choreography!

Even despite Lesley’s gruelling schedule, the warmer climes and change of scene were in themselves energising, and our rehearsals went particularly well. Heading back to the UK with a spring in our step, excitement was also building as Friday was Lesley’s birthday and the wonderful It Takes Two team surprised her with a fabulous cake and balloon – both with my face on! Remarkable! Lesley roared with laughter, as did I! It was the perfect end to a perfect week… but would the celebratory mood continue through the weekend?

A cake with @TheAntonDuBeke's face on it? Just what you've always wanted, eh #LesleyJoseph?#ItTakesTwo 🎂 https://t.co/kCVk4drbPY

The Charleston is fabulous to perform – full of fun, it’s frenetic and fizzing with energy – and we had a blinder of a dance lined up! “Won’t you Charleston With Me” from Sandie Wilson’s musical, “The Boy Friend”, was a number set in the roaring ’20s in a villa on the French Riviera. I was Bobbie and Lesley was Maisie, both dressed to the nines with tassels and spats – the works!

The music started, I leapt down to the ballroom floor from the staircase, and with the delivery of the opening line, Lesley leapt to her feet, and we were off! And for a minute and a half, we didn’t stop! What a dance! Lesley was absolutely remarkable. The pace, the precision… the flicks, kicks, characterisation and control… the synchronised steps, the slapstick… not to mention the swivel! My goodness me, Lesley gave a sensational performance! As we caught our breath, we realised the audience were on their feet – tremendous!… The judges were brimming with enthusiasm too!
“Shocking… Shockingly good, I mean,” started Craig, the audience erupting again. “I could never keep that much stamina going for that length of time… It’s incredible, you shock me each time… I loved it!” Then Darcey: “You bring such a cheeky, fun, naughty little girl to this… and the confidence… those high kicks – absolutely gorgeous, really!” Len’s comments were music to our ears too: “Definitely your best dance to date… and if you keep that up, on Strictly you’re going to to have Many Happy Returns, well done!” The compliments kept coming: Bruno said “Ah Lesley always delivers… you looked like a 20-year old out there! Your timing was right on it, performance value was very, very high all the way through – I’m astounded, I think you did a fantastic job!”

"You looked like a 20 year old out there" – Bruno on Lesley Joseph! https://t.co/wjqmF6d7qW

Lesley is simply a dream partner – a joy to dance with and I – like the judges – continue to marvel at her energy, concentration and stamina!

The scores were in: a 7 from Craig and 8s each from Darcey, Len and Bruno. We were both over the moon to have totted up 31, including our first 8s in the competition… and most importantly an increase over last week with our highest score to date.

As for the leaderboard, by the end of the show, for the very first week, we were on the upper half! Hurrah!! As always, it wasn’t until the Sunday night Results Show that our Strictly fate was revealed, and knowing how the leaderboard can turn on its head when combined with the public votes, we weren’t counting any chickens. But lo and behold, our names were called out first! Just the most wonderful feeling! We were safe… we’d made it through!

Woo! Dancing another week, it's Lesley and @TheAntonDuBeke! 🎉 #Strictly pic.twitter.com/xdSHSvYiAb

There’s of course no escaping the rules to the show, so one couple was sadly destined to leave. This weekend’s dreaded dance-off pitched Naga & Pasha head-to-head against Anastacia & Brendan – a result none of us could have predicted. After two very strong performances, both couples dancing with more confidence than they had in the main show, it was clearly no easy decision for the judges. But after a particularly good Rumba, Anastacia was saved, and we all had to say goodbye to Naga. Such a lovely contestant, and a promising dancer too – she’s very much missed by all already.

Now, before I sign off this week, I should make special mention to the weekend’s Group Dance. Once again, a true spectacle and a feat of choreography, but I must say I found it particularly fulfilling to be able to demonstrate my wider repertoire!… ‘Busting my moves’ I believe you could say!

Have a watch of the rehearsal video, and then the actual performance below. Enjoy! What a fantastic weekend, all round!

Get on up and get ready for a very special Pro group dance to James Brown classics. Tonight. 7.15pm. @BBCOne. #Strictly 🎤 pic.twitter.com/GhXZk2cUW9

And so to this weekend’s dance… it’s The Tango. Ah yes! And my word have we a dance in store for you!

Until then, my loves, thank you all so much for your continued support… Lesley and I both appreciate it immensely!