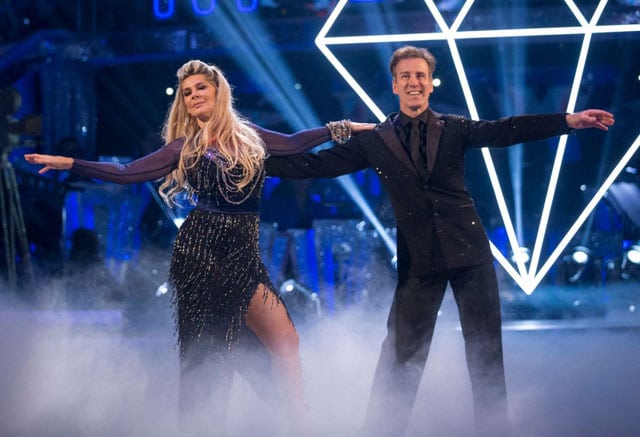 The BBC really rolled out the red carpet for a top-billing show Saturday night – Strictly does ‘Movie Week’ like no other television programme, that’s for sure! What a blockbuster evening of dance and entertainment… hats off to everyone involved for putting on such a wonderful show – not least the geniuses behind the scenes. But of course, the focus was on our front-of-camera performances with themes, costumes, and new dances to present – but it wasn’t a box-office sensation for everyone…

After nailing the Charleston (Shirley’s words!), we had high hopes for a killer Rumba with our Bond-themed dance. Ah the Rumba, the dance of love – the first of the series, too – no pressure! A notoriously difficult dance, and especially for a non-dancer so early in the competition – it really does require such a degree of confidence and technique, the steps themselves having to be second nature to allow the dance to be truly ‘performed’. All of which is a tall order, week three.

I couldn’t be more proud of Ruth’s dedication and determination during last week’s training, and I personally was absolutely delighted with our performance; more than that, I thoroughly enjoyed it, too.

In the cool blue light, bedecked in jewels and sparkles, Ruth was a diamanté vision as our routine began – bearing a striking resemblance to Kim Basinger with those long blonde locks – quite the leading lady, very much the Bond Girl, and simply stunning!

As the music began with that wonderful, iconic melody, those fabulous lyrics, I made my entrance with the panache of Anton Du Bond. I struck a pose, and thus we began our sensuous Rumba, caressing the dance floor under a cloud of dry ice, focusing on hip action and flowing continuous motion all the while embracing the styling and drama from a Bond movie opening sequence.

The Rumba is a difficult dance. But looking dazzling on the dance floor @RuthieeL & @TheAntonDuBeke #Strictly 💎 pic.twitter.com/9P4cNgcxCf

The audience certainly seemed to approve, and we felt worthy holders of our licences to thrill… but the judges’ comments made us feel like we should be turning them in!

Tess asked Bruno if he was shaken or stirred, which he replied “I think I was frozen!” He went on to explain how he felt Ruth’s hips needed defrosting, that the dance needed more heat and that it wasn’t her best. Things weren’t going to improve with Craig who said the rumba walks were “very stilted, and lacked hip action,” and also that it was as though Ruth was wearing a mask, hiding any acting – Ruth quietly replied that she was indeed… to hide the terror!

It was at this point I felt compelled to chip in as the feedback wasn’t feeling particularly constructive. I, a gentleman of a certain age, certainly did feel stirred by proceedings… I had a fabulous time and thoroughly enjoyed the performance with my first class Bond Girl, and it needed to be said!

Darcey then continued on a brighter note: “This look is to die for – you look absolutely fabulous.” She went on to agree with Bruno and Craig on technical points around resistance, balance, transitions and so forth. Both Darcey and Shirley referenced eye contact: that if Ruth had held my gaze it would have helped with the sensuality of the dance, as well as her balance. Good feedback there, and that’s something which I’m sure will come with confidence. (It’s most likely my sparkly jacket proved such a dazzling distraction she had to concentrate hard on looking away!) Shirley also acknowledged that the Rumba is an extremely difficult dance (hear hear) and I’m pleased everyone could properly appreciate how hard Ruth had worked to be able to perform it.

The scores, however, gave no ‘Quantum Of Solace’: mere 3s from Craig and Shirley, a 4 from Bruno, and a most welcome 5 from Darcey. Total: 15. Oh dear… it almost knocked ‘The Living Daylights’ out of us – we were certainly left shaken! Such a shame that our scores took a dive after the improvement we made from week 1 to week 2; ah, the Strictly rollercoaster! Finding ourselves second from the bottom of the leaderboard, just one point above the Rev’d Richard and his Flash Gordon Paso, you can imagine our nerves during the results show as we feared the worst. Even the wonderment of the ‘La La Land’ themed Pro dance (wasn’t it tremendous?!) couldn’t quell our nerves as we waited so see if we would survive to ‘Die Another Day’.

And so, you can imagine our utter relief, when our names were called out as being through to next week. My goodness me, it always comes as a surprise; when you’re under those lights with that fateful music in the background, you can’t help but fear the worst, and this week was no exception!

This week’s dance off was between Simon & Karen with their Toy Story inspired Quickstep and Reverend Richard & Dianne with their Flash Gordon Paso. (The likes of which could only happen on Strictly!) Despite valiant efforts and wonderfully entertaining performances from both couples, one had to leave the competition. The judges were unanimous in saving Simon, and we all bade a very heartfelt farewell to our resident Reverend. What a wonderfully dry sense of humour – he had us all in stitches! He did confess that he knew he couldn’t dance… but after giving us such heavenly performances these past weeks, I say ‘Never Say Never’!

Thank you all so very much, once again, for voting us through. We couldn’t have done it without you, and I’m just so thrilled that Ruth will have the opportunity to put this week behind her, to get this most difficult of dances under her belt, and to move forward with the next one. I do so hope her true potential is realised! Until then, it’s back to training – and no time like the present, after all, ‘You Only Live Twice’!

Until next week my loves,