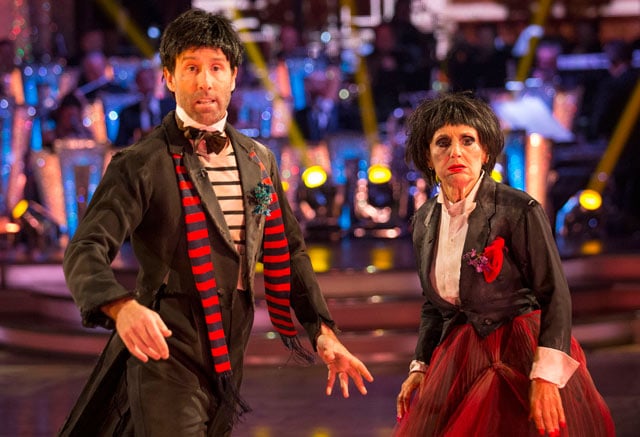 Lights, Camera… Action! This weekend saw the culmination of ‘Movie Week’ on Strictly, and my word was it a Saturday night showstopper! From the overture to the grand finalé, Strictly brought the magic of so many favourite silver-screen blockbusters to the Strictly ballroom in what must be just the most fabulous episode to date! I’m going to raise the curtain on this week’s blog post with the tremendous opening number from Saturday’s show. Just the most wonderful medley and a blockbuster number in its own right – quite the feat of creativity and organisation, so hats off to all those involved!

This week, Lesley and I were to feature in our own screen classic… and I don’t mind saying we were both near delerious to learn we’d be channeling Fred Astaire and Judy Garland for that iconic number ‘A Couple Of Swells’. Featuring in the 1948 hit musical film ‘Easter Parade’, this timeless Irving Berlin song would require actions, costumes, characters and make-up, we were in our element! The dance? Our old friend the Quickstep! The stage was, as they say, set! Our routine was based on the original number, a sketch by our characters Don Hughes and Hannah Brown from one of their theatre shows in the movie’s story. It revolves around them working out how they’d travel to meet the Vanderbilts at their Club, somewhere along ‘The Avenue’. Drive, skate, cycle, sail, ride a horse or take a trolley car… they’d end up walking… we, on the other hand, would Quickstep up The Avenue!

Lesley learned the steps like a dream, including the Fishtail you may recall Len pointing out on the show, and of course, the comedy skits timed with the phrasing of the music and lyrics all came second nature to her. More than that, the Quickstep needs a level of performance rare in our celebrity partners in these early weeks… it needs velocity to give it that lighter-than-air feel and to achieve the travel across the floor… and that in turn requires confidence. It also needs split-second timing, too, not to mention energy and stamina. Lesley was an all-round marvel, truly, a marvel. You can see from the photos that nothing was held back costume-and-make-up wise… what a transformation! I’m sure Lesley had initially thought all the Strictly dances would involve some degree of sequinning… but not this week. After all, our characters were tramps, and the BBC went so far as to give me a wig, and Lesley a missing front tooth! I was even under special orders not to shave all week for the full effect. (I’m sure none of this was what Lesley envisioned when I said she’d be playing Judy Garland!)

Well, as far as I’m concerned, it all worked! Everything came together beautifully and it was one of my favourite ever Strictly performances, and Lesley had an absolute ball too.

As for the judges… well, Darcey captured it marvellously: “Such a treat – spirited, fabulously cheeky, the character came alive, and so much dance content all the way through. So many beautiful moments… such a gorgeous surprise, I loved it.” Len said there were lots of references to the film, but also that we “blended it with proper quickstep content, which [he] thought was fantastic,” and complimented us on our Fishtail step. “You’re a golden oldie from the silver screen and I thought you were great.” Bruno said there was plenty of spring, and “loved the role-play and quirky character,” but also spotted a slight mishap in the far corner… but apart from that, “it was wonderful.” Craig said the footwork wasn’t quite compact enough at times, but went on to say that “the energy and characterisation were absolutely brilliant and I hope, darling, that when I’m your age, at 70, that I can whirl around the floor like that.” Marvellous indeed – I thought we were a hit! Plenty of positives, and again, some constructive points we can work on for next time!

"I hope when I'm seventy I can whirl round the floor like you darling" – Craig #Strictly https://t.co/9dzcbgKzfs

The scores were in… a six from Craig and sevens from Len, Darcey and Bruno. Total: 27… more than last week, so we’re still on the up! As for the overall leaderboard, we were still perilously close to the bottom: joint tenth alongside Anastacia and Judge Rinder, just inching ahead of Naga and Ed. The Sunday night results show had us on tenterhooks throughout as we awaited the verdict on whether we were through, but it was also another big show as regards group numbers – did you see my directorial debut in the routine at the start? Not to mention my dance with Joanne Clifton to a very moving West Side Story duet by Michael Ball and Alfie Boe. As for the results, we were left right until the end. I thought we were out – I’m sure Lesley did too. Even when Tess announced Tameka would be in the dance-off and not us, the penny hadn’t quite dropped…

That's right, Lesley – you and @TheAntonDuBeke are through to Week Four of #Strictly! pic.twitter.com/e5uC0dr89Y

So once again we were saved – hurrah! We couldn’t be more thrilled to have made it through, and bowing out this week would really have rained on our Parade! Sadly, of course, two couples had to dance again to stay in: this week it was Tameka & Gorka, and Laura & Giovanni – a result none of us had expected.

After valiant performances by our couples, the judges were divided in their opinion, but ultimately it was Tameka & Gorka to whom we bade farewell. Such a shame, Tameka as I’m sure you’ll agree was particularly entertaining! But as Len said, it’s the nature of the show.

On those parting words, I’ll sign off myself… We’ve a very busy week ahead with Lesley filming ‘Birds Of A Feather’ in Malta – our training will be hotting up, that’s for sure!

Follow me on Twitter and Facebook for news of when we’ll be on #ItTakesTwo this week, and of course, tune in next Saturday to see our next performance!