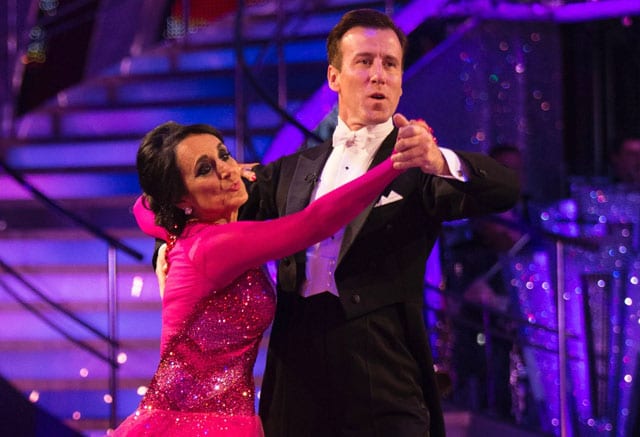 And we’re off! After our initial 3 week training period, Lesley and I took to the dancefloor last weekend for our very first performance in the competition: no turning back now… Lesley’s Strictly journey has well and truly begun!

For our dancefloor debut as a competing couple, Lesley and I were given the Waltz. Nice and leisurely, you might think… an easy introduction perhaps… You’d be forgiven for thinking that gentle flowing triple-time rhythm would carry one along effortlessly… Well, let me tell you, that elegant top line and posture is underpinned by lots going on at ground level: precision footwork, turns, as well as the crucial rise and fall. With a slow dance, everything is on show… and with Len’s Lens and the eagle-eyed judges, there’s nowhere to hide!

Our music gave some comfort from the outset – ‘What’ll I do’ – which of course was the theme tune to ‘Birds Of A Feather’. This was a great help really, as Lesley was already familiar with the phrasing and dynamics of the piece. And knowing ‘what comes next’ in the music is a great help when memorising steps.

As training began I was quickly flabbergasted not only by her enthusiasm, dedication, professionalism, perfectionism and speed of learning (all marvellous traits)… but also her energy too! Now, there’s been much chatter about Lesley’s age with respect to that of the other competitors, and I being a gentleman of course shan’t refer to it beyond stating: my goodness – she’d give someone half her age a run for their money! I’m quietly confident as to her Strictly potential. Can you tell? That initial period of training has a tendency to fly by, particularly towards the end when the buzz starts to build. Here we are when we appeared on Loose Women (and had a rather marvellous time there, too)…

Then, all of a sudden, the weekend was upon us. We’d been scheduled to dance in the first of the two shows, airing late on the Friday night, so very quickly everything stepped up several gears. It’s at this point the celebrities are taken from the training rooms to the actual ballroom… with costumes, cameras, dress rehearsals… everything timed to the nines with an orchestrated schedule that leaves no margin for error. The pressure’s certainly on. Lesley handled it with aplomb.

Before we knew it we were live to the nation. Strike up the band! The show got off to a flying start – we were fourth in the running order, and had already been keenly making mental notes about the other competitors as they performed before us one-by-one. Then our names were called!

We took our positions, the studio dimmed into monochrome as Lesley got into character for our performance and that familiar lilting refrain drifted across from Dave Arch’s band. Lesley held aloft a framed photo of a lost love, deep in reverie, and I emerged from the shadows to take her in my arms and restore her world to technicolor for the fleeting two minutes of our waltz. I thought it was glorious. This was no straightforward routine: I’d included a lot of content, and I’m sure Lesley scarcely put a foot wrong. Such a delicate, tender tune, perfect for the lightest of steps across the dance floor – and my word, was Lesley light on her feet. As far as first week dances go, this was top class and I couldn’t be happier with her performance.

Familiar territory for Lesley… BUT @TheAntonDuBeke will have to play both Sharon AND Trace #Strictly ✨ pic.twitter.com/8Jp6DSs7rG

Now, admittedly, there’s a slight height difference between us, something which requires some negotiation and I’d proffer that this, combined with first night nerves, likely accounted for the posture issues the judges rightly raised. That aside, they gave very favourable reviews indeed, much to our great relief!

Darcey said Lesley was “sophisticated, romantic, elegant.” Marvellous, and quite right, too. She said there was “great control throughout”, and then gave her a warning about getting lost in my chest. Ah, easily done! (Though I’m not sure quite how best to work on that one!) Posture was indeed raised, but Darcey’s quite right, once the nerves subside, so too will the raised shoulders. Len complimented us both on our proper presentation, but also on Lesley’s “very clean, very precise footwork.” Praise indeed, especially as he went on to say “I thought you danced it beautifully.” Result! Bruno said it was lovely, touching and moving, and very well acted. Both he and Craig referenced posture, but Craig very eloquently concluded by saying Lesley “danced it with ease and some sort of delicious flow.”

All in all, I’d say that was a resounding start! The scores were in… with sixes each from Len, Darcey and Bruno, and a five from Craig, giving us a total of 23.

Surreal is the only way #LesleyJoseph can describe dancing live on #Strictly with @TheAntonDuBeke! https://t.co/qEoJY1iqZf

Although this did place us joint bottom on the Friday night leaderboard, it’s still a very respectable first week, first dance score, and with very positive comments to build on, too.

With just six couples dancing on the Friday night show, the remaining 9 performed on Saturday night. Another spectacular show, start to finish, top notch entertainment and fine performances from the rest of our celebrities. As expected, a range of abilities was demonstrated across the board with some standout performances.

As the overall leaderboard was revealed, it turned out that we’d gone up in the pecking order, finishing joint 12th with Naga & Pasha, ahead of Melvin & Janette, and Ed & Katya, and with Daisy & Aljaz ruling the roost up at the top with 32 points. Everyone was very relieved not to be facing a dance-off situation this week – the scores are to be combined with next weekend’s to determine who’s at risk of being first to leave the show. Phew! And with the debut dance under their belts, the celebrities now have a clearer idea of how the show works and what to expect each week – this can make a real difference in combatting nerves and in helping them deliver that perfect performance.

And so, it’s back to training for me and Lesley. A busy week ahead with lots of ground to cover. With Lesley’s marvellous attitude, and her remarkable abilities, I’m very excited at the opportunities each new dance will bring. Onwards and upwards… and here’s to this weekend!

Tune in on Wednesday evening, 6:30pm to see us on It Takes Two, and of course this Saturday at 6:20pm to see us, and all the other couples, dancing to stay in the competition!