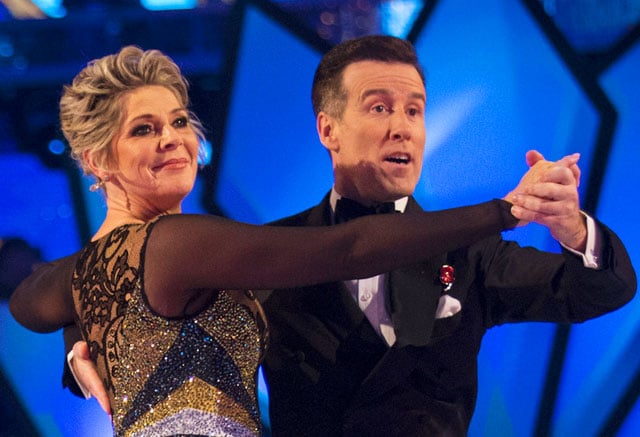 Well my loves, the glorious heights and twinkling lights of Blackpool Tower may well have been in our sights, but alas, t’was not to be! Our Week 8 Foxtrot was unfortunately to be our swan song in this season of Strictly Come Dancing, but for my part, dancing with the wonderful Ruth Langsford has been thoroughly uplifting, and we absolutely ended our time on a high!

Ruth and I were both thrilled to be able to dance a Foxtrot to the wonderful Bobby Darin version of ‘Mack The Knife’. A classic tune, and one with particularly strong emotions for Ruth – it being a favourite of her Dad’s – so this dance became something of a tribute to him, and all the more special.

Training during the week went well…

.@RuthieeL and I are working hard on our choreography for Saturday. Who's excited about #Week8 of @BBCStrictly? #SCD #Strictly pic.twitter.com/ewUHNuR3yZ

…with some moves which made the cut… and some which didn’t!

When it came time for costumes, we knew this was going to be a corker – a proper suit for me, and hats and canes for us both. Classy, and just the ticket!… Though, as it turned out, not the right ticket for the Blackpool Express!

I for one thoroughly enjoyed our performance – how could I not? With a wonderful partner, wonderful music, wonderful staging… I was in my element! And although the showtime nerves crept in a little for Ruth, I know she enjoyed every second of it too. From our side-by-side intro section, with jazz hats and cane action… through to the our time in hold as we glided across the dancefloor… Joyous! Admittedly the tempo was somewhat animated and our Foxtrot had elements of mild gallop at times but we found that keeping things moving along was a good way of managing the timing – Ruth will admit that counting wasn’t her strong point! But catching props on live TV certainly was – who knew?! What a star; is there no end to her talents?!

Something of a result was that I managed to remain upright at the end of the number – I was determined not to repeat my indecorousness of last week! But I think as we approached the Judges for their critiques, we both felt we may not have quite captured the magic of our bewitching Quickstep, our tumultuous Tango, or indeed the roof-raising finalé of our Paso (indecorousness aside!). Had this week’s dance out-foxed us?

It came as no surprise that Craig didn’t enjoy the opening sequence, said the routine was like a horse trotting and pointed out a number of errors. Darcey like the amount of content though said there was no glide, and that Ruth was ‘swimming’ in hold and “out of her depth” in this dance – to which I disagreed, of course. Shirley was firm (with Blackpool on the horizon) and was put off by the quicks versus slows; she said it wasn’t her favourite. Bruno said “It was the fox that lost the trot… it turned into a gallop,” and that the timing was out… Oh dear, it didn’t go too well in their eyes… though given the Foxtrot is no easy dance, I still hold that Ruth performed amazingly well.

The scores confirmed our worst fears… Fours from Craig and Shirley, and fives from Darcey and Bruno for a total of just 18. “Undermarked,” I hear you cry! We certainly got that sinking feeling, especially when, by the end of the show, we were once again at the bottom of the Leaderboard. Well done Ruth. I am so proud of you. I thought you danced beautifully and it was a lovely tribute to your dad x #scd #dancing #dance #special #partner #foxtrot #saturday #show @ruthlangsford

The Sunday night results show was an event in itself. I simply must mention the beautifully poignant and powerful Remembrance Day tribute dance that us professional dancers had the honour of performing. I’m not sure if there was a dry eye in the house by the end. So very fitting for such an important day when we think back to those who gave their lives for our freedoms. We were thrilled to be accompanied by the RAF Spitfires Choir, and to have so many servicemen and women join us in the audience. Huge and heartfelt thanks to all of them.

#LestWeForget a powerful and touching #RememberanceSunday routine from our Pros. #Strictly pic.twitter.com/uujbWkCY97

The wonderful performances didn’t stop there… Seal was here to perform his new song, and Nadiya and I were thrilled to accompany him:

Tonight's show is a real bobby dazzler – and @Seal's joining us for a sing song! ✨ @BBCOne, 7.20pm #Strictly pic.twitter.com/Z0XHofZpyp But the evening remained unforgettable for yet more reasons… As one by one the couples were saved, for the first time this series Ruthie and I were bathed in the dreaded red light… we were in the Dance-Off.

Red light alert 🚨 Ruth and Anton are in the Dance Off. #Strictly pic.twitter.com/erUGRaLauQ

Testament to how tricky the Foxtrot can be, we were pitched head-to-head against Jonnie & Oti who’d also fallen foul of this dance. Suddenly the distant glow of the Blackpool Illuminations was becoming dimmer and dimmer with every passing moment. We danced our dance as if it were our last, and once again, I was so proud of Ruth for giving us such a fabulous performance… and, let’s not forget, catching the hat and cane again at the end! What a pro!

Credit where credit’s due, Jonnie & Oti delivered a wonderful dance, and the Judges were unanimous in saving them. Understandably, Ruthie and I couldn’t hide our disappointment – we were of course utterly heart sunk not to be heading to Blackpool, but at the same time thrilled and so very thankful to have made it this far in the competition and to have had eight wonderful weeks performing together on the Strictly dancefloor. Their Blackpool dream has been cut short 😢 RT to send @RuthieeL and @TheAntonDuBeke some love 💗 pic.twitter.com/Hz3pgNBtxk

We took to the floor one final time for our last dance, which became something of a spectacle, ending in what’s become a ‘signature move’: the ‘Pile on’… I’m under there somewhere:

Even after Strictly, they couldn’t keep us apart, such was our partnership! Here we are on Loose Women… watch and enjoy – we even have one last twirl at the end! Tens all round from the team – and rightly so – what an absolute dream this series has been. Full on entertainment – I’ve had a ball, and if Ruthie has had half as much fun as I have, I’m over the moon. What a delight she has been to work with these past months, truly a privilege. Not only to be able to spend so much time with such a wonderful person, but to share the highs and lows of the training process – the kinds of things that make friends for life. To see her talent, abilities and confidence grow has been such a thrill, and I do so hope that she continues to dance – it’ll be such a waste if she doesn’t! (I wonder if Eamonn could be tempted to give Strictly a go next year?!)

Well my loves, there ends my Strictly journey for this year – eight wonderful weeks with a truly tremendous partner – what an experience. This series has been simply joyous and I couldn’t have wished for a more entertaining, more enthusiastic, more sympatico partner. We’ve laughed, we’ve cried, we’ve had thrills… and spills, we’ve danced and danced and danced some more… but most importantly, we’ve had just the most fun! Hats off Ruthie, you’re a star!

Ruth and I would also like to convey our heartfelt thanks to you for all your love, your unending support, and for being so generous with your votes each week – you’ve been instrumental in enabling us to keep dancing all this time, and we are so very, very grateful. You’ve helped make Ruth’s Strictly dream a reality, and we so hope we’ve entertained in return.

Until next time, and with all my love,