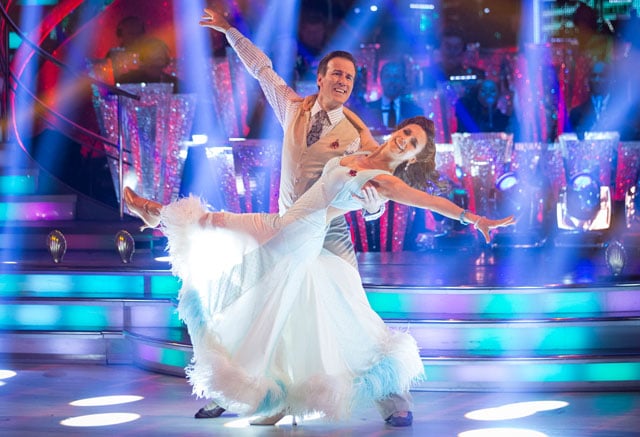 We certainly hot-footed it across the dancefloor last Saturday night with our Broadway inspired Quickstep to the musical classic, ’42nd Street’! The original production was set in New York at the time of the great Depression – would our routine give us a much-needed leaderboard-lift, or would our scores leave us in the doldrums?

Opening our routine with some hat-and-cane-choreography gave Katie her first real taste of working with props, and we had some marvellously sync’d hat-tipping to get us off to a fine ol’ start.

Then, without any more ado, we were off!…Hurtling across the dancefloor in a rip-roarer of a Quickstep. We packed lots of content into the routine – made all the more challenging by the sheer velocity of the dance, but Katie once again gave a tremendous performance. What a true pleasure she is to dance with: so elegant and light on her feet, and always brimming with enthusiasm – we were both skipping along with glee. Granted there were a couple of hairy moments but even when footing may have been lost, the broadest smile on her face wasn’t. Joyous! As we reached the finalé of our routine we received another standing ovation from the studio audience – “This bodes well…” I thought to myself, heading over to Tess and the judges. The verdict, however, came as something of a mixed bag…

Bruno started off well, saying he felt like he was in 5th Avenue, “so much beauty and glamour”, and that the beginning was great, but then said that road is full of potholes, and once you hit them you lose the footwork and then the frame. Craig acknowledged it as being a “very ambitious routine,” within Katie’s capability, and that with a little more practise we would have smashed it. Darcey said it was made for Katie, and that she was “beautifully light on her feet,” but noted that if a challenging routine can go wrong, the core and frame can weaken. Len was best: he, like the others, referenced how control can be lost with a slip at speed – granted – but rounded it all up by saying “Can’t take away the fact that it was a fantastic performance!” That’s more like it!

The scores were in: sixes from Craig and Bruno, and sevens from Darcey and Len, for a total of 26. Good; not bad… but not great. Indeed, an improvement indeed over previous weeks’ scores, but I’ll admit I was hoping for more, especially as it placed us 8th out of 10 – a similar situation to last week: poised precariously just above the danger zone. Mind you, with the way the votes can change things around, much of the leaderboard constitutes a danger zone! "I haven't forgotten those hops since about Monday afternoon!" says @thekatiederham to @TheAntonDuBeke post… https://t.co/6lwqX3g6DK

Then came the Sunday night Results show – what a night to remember! ‘Major Du Beke’ opening the show’s most fabulous Remembrance Day routine to get everyone ‘In The Mood’ for what was to come. It was firstly something of a shock (and huge relief) to us both that we’d made it safely through to the next week (Hurrah!) – and once again, surely all down to the wonderful voting public. Thank you, thank you, thank you!

…But there was another shock (now, remember what I said about the danger zone…): Kellie and Kevin had slipped from 5th place on the leaderboard, down to the bottom two where they now faced the dance-off – and it was Kevin’s first ever dance-off to boot! They were going head-to-head against lovely Carol and Pasha. Both couples lit up the dancefloor with wonderful reprises of their routines, but it was our resident ray of sunshine, Carol, whom the judges sent home. Such a sad loss for the rest of us, she really did bring something very special to the show and was a delight to be around.

But the show must go on, such is the nature of Strictly! The remaining 9 couples will be fighting over 8 places on the coach to Ballroom Mecca… Blackpool! Hot on the heels of our Quickstep, we’re slowing things down for a sensuous dance of love – it’s the Rumba!