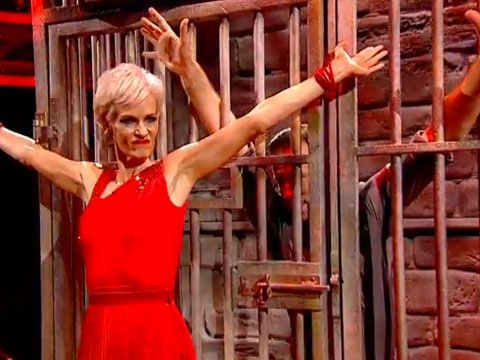 Judge, jury and a bid for freedom – our Paso certainly brought some courtroom drama to last weekend’s Strictly – guilty as charged!

Our Paso Doble began with me being sentenced to time behind bars for the ‘illegal lifts’ our routines have boldly included – a fair cop! – and Judy led me to my cell via a florid display of Paso moves around the floor before she slammed the door shut with steely conviction! A very aptly themed routine I thought (in view of choreographic transgressions) and danced to a fitting ‘I Fought The Law’. With suitable fierceness, some more illegal lifting, and a fiery red dress, we made it through to my eventual jailing. Tremendous! Once our routine was over, however, it was like having a retrial… only were were both in the dock, and this time before the official Judges! On the positive side, Darcey said it was a good effort, recognising Judy’s strength from her kicks and jumps, but that fierceness was missing. Bruno called Judy a ‘revolutionary dance outlaw’ breaking rules and reimagining dance as we know it – well, I must say, surely that’s a very special compliment, and I couldn’t agree more! Craig said it was all very pedestrian and that we walked through it… though I retorted that there is a lot of walking in a Paso and that we didn’t want to overly exert ourselves. Alas, that didn’t seem to help. Len capped it off by saying ‘If stiffness was a crime, you’d get life’… though did show some leniency in saying, with a cheeky wink, that I’d already done two months’ hard labour 😉

Ever consistent with the scores, we totted up an 18 (including a 3 from Craig letting the side down) which placed us bottom of the leaderboard, again. Heartsinking, but seeing the calibre of the other performances, the verdict had been passed, and we knew our place.

So, you can imagine our utter surprise and disbelief when once again we were saved by the public vote. Thank you all so very much for your continued support, it really is remarkable. Completely unexpected that we should make it through – as you can see from our reaction! But once again we had to say goodbye to another wonderful couple: Alison and Aljaž, after they delivered a sterling performance in the dance off against Caroline and Pasha. Another huge surprise for the weekend, and of course a difficult decision for the judges to have to choose between such fabulous contestants; we’re hugely missing Alison already.

And so… we’re Blackpool bound! Hurrah! We’ve a Viennese Waltz this weekend – perfect for the fabulous sprung floor of the Tower Ballroom. Once again, I must remark on how Judy has improved week on week, and we’re really loving how this dance is progressing so it all bodes well. Judy says she feels like she’s dancing more too, and I’m so thrilled that she’ll be able to experience the magic that can happen in that legendary ballroom.

Oh I do like to be beside the seaside…! Tune in Saturday!