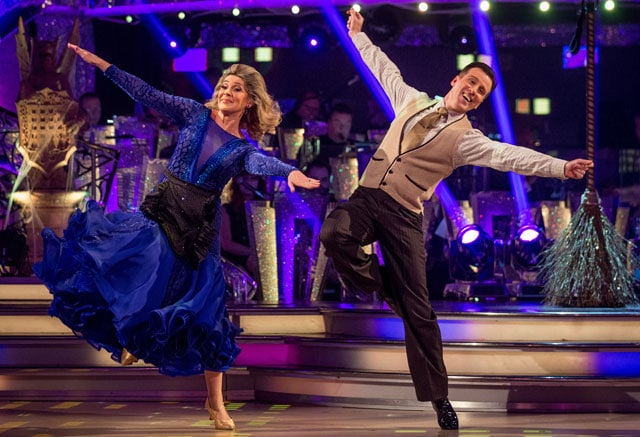 After the frills… and spills of last weekend’s in-flight Samba, week six of this season’s Strictly was Halloween week with a ‘Bewitched’ theme for our Quickstep. Would it be all toil and trouble, or would Ruth work her magic, cast a spell on the judges, and levitate us back up the leaderboard?…

Training and rehearsals went well during the week – I could tell Ruth’s confidence, technique and ability were all on the rise, and after making it through this far (and being spared from the dreaded dance-off each week, too), I do believe she’s starting to believe in herself as a dancer. That’s a tremendous accomplishment, and I’m so, so proud of her! In fact, she’s getting so good that we can even film ourselves in training!…

Bring on the Quickstep! It’s been a hard week of rehearsals but we’re ready and excited for Saturday! P.S. 57 but still great!! #halloweenweek #quickstep . . . #Repost @ruthlangsford I think @mrantondubeke is trying to kill me! Could someone please remind him I'm a 57yr old woman with no dance experience! @bbcstrictly #quickstep #strictlycomedancing #antondubeke

As always, the weekend was upon us before we knew it, and with all the tricks and treats of Halloween Week to add to the production, it was a full-on lead-up to showtime. And what a show it was – the Strictly team went all-out to create what must be the most spine tingling episode ever! Whilst for our routine, our costumes weren’t as chilling or macabre as some of the other contestants’, they were just as bewitching nonetheless! To fans of the original 1960s sitcom (Ruth and myself included), they couldn’t have been more perfect – and after all, Halloween doesn’t have to be all fangs and frights!

Well, I can honestly say I don’t believe I’ve ever begun a routine as a rabbit before. Now there’s a first! Sat there quietly on the kitchen table as Ruth descended from on high on her broomstick (not the easiest of entries to settle one’s nerves), then, with a twitch of her nose and a puff of smoke… I was summoned literally by magic to the dancefloor as Darrin to her Samantha! (The magic may need some practise though as you may have spotted I was still sporting a very perky cottontail as I made my way over to join her!) My, didn’t she look wonderful – such a spookily strong resemblance to the wonderful Elizabeth Montgomery from the original sitcom, so elegant in her glittering gown… and I cutting the charming dash of an American ad exec. with my horrifyingly 70s waistcoat!

Ruth certainly got into character, as whatever magic she was channeling had us flying round the dancefloor! The quickstep is such a fabulous dance – it’s one of my favourites (Foxtrot aside), and I was so thrilled to have been able to dance it with Ruth particularly at this point in the competition where the celebs have enough technique under their belts to keep up with the delivery of a dance like this – it makes it all the more fun.

They really pulled a rabbit out of the hat tonight! 🐰 Magical moves from @RuthieeL and @TheAntonDuBeke #Strictly pic.twitter.com/tSbzyLcE2D

I thought our dance was frightfully good! For me, Ruth nailed it – she’d certainly worked her magic on me – and on the audience too as they rose to their feet at the end of the routine! Tremendous!… We just had to hope that the judges wouldn’t be too ghoulish with their scores.

Bruno began lyrically: “I was bewitched by the elegant look… slightly bothered by the frame … and bewildered: you went off on the wrong foot, but you brought it back… well done!” Ah, what a shame he’d spotted it! Craig took the week’s theme to heart and gave a truly gruesome verdict: “It lacked any style, too heavy, too sloppy… for me, the antithesis to light and bright.” Full marks for getting into the spirit of the theme, Craig! Darcey brought some light to the gloom: “It was perfectly charming – you became the character. You were light on your feet, you’ve gained such confidence. You’ve made a wonderful improvement so be proud.” That’s the ticket, and a sentiment echoed by Shirley: “You’ve made strides but you did make several mistakes. Nice free flowing, not bad with the frame, but a good effort… Besides the mistakes you’re actually improving – I feel it’s going in the right direction.” That’s what we want to hear – and such a fabulous boost for Ruth.

The 6’s are 9’s in my eyes! Well done @ruthlangsford…you were amazing once again. Loved dancing Halloween week with you! 👏🏻🎃 #scd #bts #dancing #halloween #partner #strictly

The scores were in: a dastardly 4 from Craig, followed by three sixes, giving us a very devilish total of 22. Our second highest score so far, so by the law of averages we are indeed making some progress, and it put us in 8th place – 4th from the bottom. In Sunday’s results show, a particularly deathly chill drifted across the dancefloor when all the couples lined up to learn their fate. No need for any additional Halloween special effects either – with the dwindling number of us left, it was quite scary enough! Thankfully, this week, our names weren’t left to the very end… we were absolutely thrilled to bits to be put out of our misery and hear our names called as being saved!

But as always, the truly horrifying part of the weekend’s events was yet to come – the elimination. This week’s demonic dance-off was between Simon & Karen and Mollie & AJ. Sadly, despite Simon becoming something of a pro at the dance-off, Strictly’s grim reaper tapped him on the shoulder: his time had finally come as the judges were unanimous in saving Mollie. How he’ll be missed – what a true pleasure he’s been to have on the show, Simon really embodied Strictly and I so hope he’s been an inspiration to lots of viewers to give dancing a go! What a gent!

A haunted ballroom, a coronation for Debbie, and Aston reaches his Paso Nirvana. See the ghastliest bits from #Strictly's Halloween week 🎃🕷✨ pic.twitter.com/wTdFJzC9BF

No rest for the wicked, as they say… Ruth and I were straight back into training for this coming weekend’s Paso Doble. You’ll have to wait and see what capers we’ve got in store! Not long to wait though, tune in tomorrow at 6:50pm for Strictly week 7 – and with just nine couples left, your votes will count all the more!

Oh, and if you haven’t already heard, I’ve a wonderful album being released very soon – you can pre-order it now! Click through to learn more… Meanwhile my loves, I’ll see you on the dancefloor tomorrow!