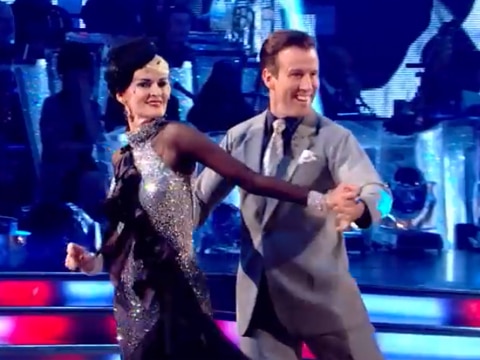 Devilishly good or ghoulishly ghastly… Read all about our American Smooth for Strictly’s Halloween weekend!

Well, it was the Halloween Special on Strictly last weekend, and the bar – and spirits! – were raised even higher. The staging, production, music, make-up and costumes… not to mention the dancing – all phenomenal, truly. I must make reference to the opening pro number to Bat Out Of Hell, and my blood-curdling, and literally hair-raising aerial entrance as Count Dracula. Spinning and twirling through the air… utterly terrifying; appropriate of course, given the week’s theme! (Now I know what Ann Widdecombe felt like!)

As for our American Smooth… ah, the best laid plans…

It all got off to a good start as Judy’s Cruella-mobile was lowered down to the ballroom from on high as she cried “Bring me those puppies”… but our co-star Dalmatians, Pongo and Purdy, were having none of it! Even my best dog-handling technique couldn’t coax them out onto the floor!

The routine thereon in went incredibly well, I thought; far more according to plan. Judy was very much ‘in character’ – her frame particularly suited to this role, and she certainly looked the part too. We worked very hard together to incorporate lots of content as well as some fabulous lifts (which I know Judy loves), all timed to reach the end of the routine with finesse and gusto in good measure. Spookily, however, the judges’ comments included morsels as gruesome as previous weeks. Bruno called it an American Stiff… Craig said the dogs had more grace, and that Judy was spiky – ouch!… Consider the expert characterisation though – as I quipped back: it was Cruella De Vil, not Ginger Rogers… I thought it perfectly befitted the role! Darcey recognised there was so much more dance content, a major improvement, and Len commented on style, sophistication, characterisation and again there being more content than previous weeks… a job well done from the voice of reason as Tess put it. We’ll take that; not too deathly overall.

As for the scores, I suppose there’s something to be said for consistency… though as the competition gets tighter, that consistency has brought us ever closer to the bottom of the leaderboard. And that’s exactly where our ghoulish score of 20 landed us with a bump this week. We fully expected to be in the dance-off – we could feel it in our bones… but once again, by the sheer power of your votes, we were saved! Hurrah!!! I think you could see my jubilation in the results show! A Huge Thank You from the both of us!

Once again we had to say goodbye to a new friend – two new friends in fact this week. The dance-off had Scott and Joanne going head-to-head with Alison and Aljaž… and it was Scott who was voted off the show by the Judges. What a sport. He really has come a long way from when he started out, and it’s to be applauded; well done Joanne too in her Strictly debut year – a tremendously entertaining couple.

Judy’s come on leaps and bounds, that’s for sure, and we’re able to include more and more content – and entertainment – each week as a result… I simply couldn’t ask for more! And on that front, after flying cars and dog-ography, you’ll have to wait and see what’s in store for this coming weekend. We’re doing a Paso… now this’ll be interesting!

Until then, much love,