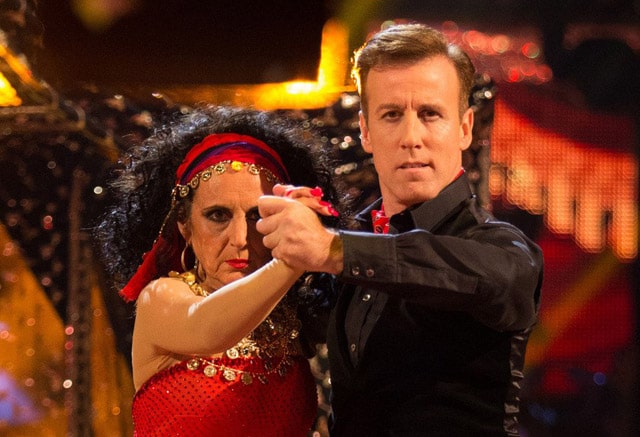 Well, my loves, as I’m sure you’re all aware, Lesley and I bade our Strictly farewells last weekend as our Week 5 dance became our Last Tango in Elstree. Lesley had the potential to go much further in the competition, of that I’m sure, so to say we were disappointed is of course an understatement. Nevertheless, what a wonderful five weeks we’ve had dancing together on the show – truly tremendous and thoroughly good fun. And so, for my final blog post this series, let’s have a recap of last weekend’s tumultuous events… Spirits were certainly high before the start of the show last Saturday, confidence too, each couple starting to build on their performances week-on-week. There’s always a ‘bedding-in’ period whilst the celebrities find their feet, so to speak, Lesley included – especially after the success of the previous weekend’s Charleston – we were both on a high, and ready to channel that into the high drama of the Tango.

"I can see Craig smiling. Oh no the glass has cracked" @TheAntonDuBeke #Strictly pic.twitter.com/pFsQr1vo7Y

The weekend delivered drama indeed, more than we’d anticipated… and more than either of us saw in the tea leaves, tarot cards or crystal ball which were all used to set the scene for the dance. ‘Whatever Lola Wants’ was our tune to Tango to – modern but with those traditional overtones of the bandoneon sharing the melody with, and winding around, the vocals. Lesley, as Madame Lola, was at her table gazing into the crystal ball as I arrived for my reading. Whatever premonition she saw in the crystal had her leaping out of her seat, over the table, and falling from on high into my arms. My goodness, what an opener!

Now, the Tango is a particularly tricky dance for the celebrities to master – the sharp moves and staccato rhythms are all at odds with the flow and motion of the other ‘swing’ dances, and as Lesley herself pointed out in interviews, to maintain a ‘passionate detachment’ is incredibly difficult to do! (Not least when in my arms, I’m sure!) Technically, it becomes a dance of contradictions and may explain why three of the four departures so far this series have been on the Tango.

Does #Strictly fortune favour Lesley and Anton? 🔮 We foresee they will smash it at the end! pic.twitter.com/X6cF6SmVgg

That said, Lesley performed a very good tango indeed – I was thrilled to bits. Our dance was packed full of content – a great deal for her to learn and deliver, plus drama – she maintained great characterisation throughout, all the while conveying a strong sense of the key elements of the dance. In a finalé almost as dramatic as the opening, I smash the crystal ball to the floor – clearly no longer needed as our dance had brought Madame Lola’s vision to life! The audience were on their feet. Brava!

The judges’ critiques certainly weren’t as glowing as they were last week. Bruno opened by referencing a few slips here and there and that the dance seemed ‘skippy’, but he loved the intensity and the acting throughout. He did say he felt Lesley was hanging on to me a little too strongly – so I quipped in about my eyeliner making me irresistible! Craig too flagged the slips, that the shaping wasn’t quite there, and concluded that it wasn’t her dance. Thankfully Darcey enjoyed the amount of dance content and praised Lesley for her energy and how much she had managed to pick up in just one week, but again referenced her frame and shaping. Len rounded up more positively, he said “it was all there: steps, moves, staccato, musicality; unfortunately there were a few little incidents along the way… Well done Lesley!”

"The energy was there! You did a really good job" – Darcey on Lesley and Anton. https://t.co/osmung2Ron

I had reservations that our upward trajectory score-wise was about to take a dive, and my fears were borne out with the scores.

A five from Craig, sixes from Darcey and Bruno, but a good ‘ol seven from Len. Total: 24. As the evening’s dances progressed and the scores tallied up, the leaderboard wasn’t looking as rosy for us as last week’s: we were close to the bottom, joint with Greg & Natalie, just above Ed & Katya. Precarious indeed. Our nerves didn’t abate and despite keeping everything crossed, the Sunday night results show was to bring the news neither of us wanted to hear. Our names were announced as the first couple to face the dreaded dance-off.

Oh no! The first couple in the Dance Off is Lesley and Anton! #Strictly 😞 pic.twitter.com/615JHhn9nW

When we learned in the second half that we’d be dancing against the wonderful Daisy & Aljaz, I think there was a tacit understanding that this might be our last Tango on Strictly. Undaunted, we approached the challenge with true gusto and danced our dance as if it really were the last dance – no holding back, and giving it everything. I’m quite sure Lesley in fact relished the opportunity to have another go with the Judges’ feedback fresh in her mind – ever the perfectionist!

It's Lesley and Anton and Daisy and Aljaz in the Dance Off. Who do you think the Judges will save? #Strictly pic.twitter.com/rgg5Sd79ds

But alas, our best wasn’t quite enough against our worthy rivals with their fabulous and inventive Charleston, and the Judges were unanimous in their decision to save Daisy & Aljaz, ending our Strictly journey there at week 5. As Lesley and I went over for our final words with Tess, the audience were on their feet and we knew we were going out on a high.

Lesley was so very kind when she said her Strictly highlight was working with me and us learning a new dance each week. We really did laugh during our time together – it’s been such an uplifting series! I said that Lesley had pushed my boundaries too – quite so – I was blessed with a partner who was already a performer, who was no stranger to fast-paced learning and who knew how to face the nerves and stage-fright of filming live television. With ticks in all those boxes, I was able to increase the content in each week’s dance knowing Lesley would be more than capable of delivering the performance itself. I must also mention her remarkable energy, flexibility and enthusiasm – my goodness me – she’s a real life dynamo! And whilst it wouldn’t really be proper of me to mention a lady’s age… I think we should all marvel at the all-round ability of this utterly inspirational 71-year-old.

Hats off… Round of applause… Standing ovation!

Lesley, you’re a superstar. Our Strictly time together has been a real and rare treat, I simply couldn’t have wished for a more fabulous partner. You have been a pleasure to work with and simply joyous to dance with.

And as the programme drew to a close, I scooped my partner up in a fireman’s lift and we took to the floor for our Last Dance.

She was a true #Strictly inspiration! RT to say goodbye to Lesley and @TheAntonDuBeke! pic.twitter.com/j0raPy8356

Lesley and @TheAntonDuBeke, you will be missed! The #Strictly gang are very sorry to see you go! pic.twitter.com/mz8TNLgvTH And so, my loves, here ends my Strictly 2016 instalments. Lesley and I had a jolly good run at the glitter ball, and I think we surprised a few people too at how good our partnership turned out to be! But alas, all good things must come to an end and we bid a sad farewell to this year’s competition.

Huge good luck to all the other couples – there’ll be some tremendous entertainment in store over the coming weeks no doubt as the competition gets even hotter – and I look forward to watching the best dancer lift that ever elusive glitter ball in the Strictly 2016 Grand Final.

And lastly, but by no means least, thank you all so very much for your continued support this series – it’s kept us in the competition all the way to week 5 and it’s meant the world to Lesley and me. Truly, it has.

As always, Keeeeep Dancing! (And if you’re missing me already, don’t forget to get your tickets to my 2017 tour with Erin!)