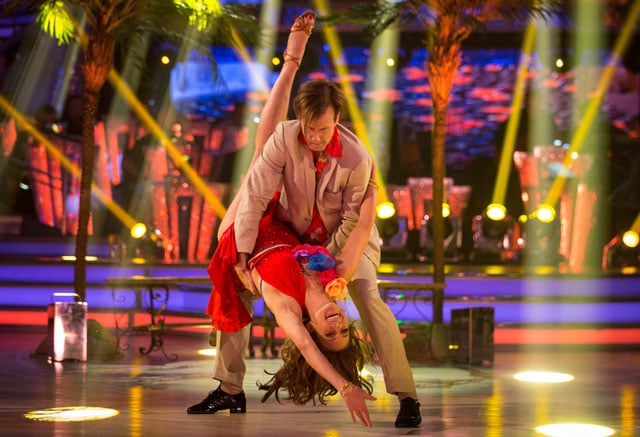 Well, talk about ‘rise and fall’, Strictly series 13 is all about that for Katie and me this year. Ups and downs at every turn… and if we’d have predicted a rollercoaster ride from one week to the next, last weekend’s salsa took us for a dive right on cue.

Dare I say, I thought it went rather well, all things considered? And thanks to so many tweets and facebook messages of encouragement from you lovely fans, our resolve remains strong and our spirits high as we return from our Havana episode and step best foot first into a new dance for week 6. Onwards and upwards!

Back to last weekend though, and I’d like to commend Katie on her performance, once again. For me, each week, she goes from strength to strength: learning new steps, techniques, characterisations, rhythms, roles – so much to take on board – she’s doing tremendously well.

Salsa after a Viennese would be a culture shock for anyone. We had a jolly scenario with me as a tourist, wandering off the beaten track in the streets of Havana looking a little lost… and Katie the seductive, sensuous Latina in a fiery red dress, setting her sights on me and clearly eager to show me some Cuban sights through the medium of salsa! What a simmering #Strictly Salsa from @thekatiederham & @theantondubeke to banish the cold autumn evening! pic.twitter.com/SkVL50gPeY The steamy rhythms of Bublé’s It Had Better Be Tonight, performed impeccably by Dave Arch and his resident Strictly orchestra, gave us a driving beat and Katie’s remarkable legs took their cue. It was a fast-paced routine, with lots of salsa content, some mesmerising armography, death-defying drops, and plenty of heat (certainly enough to get us hot)! There may also have been a little bit of improvisation at the end – an added bonus, one would think?…

.@thekatiederham & @TheAntonDuBeke raise the temperature with their saucy Salsa, but didn't raise the bar #Strictly pic.twitter.com/OiKT4rsoMZ

Not so the judges, who seemed to have remained lukewarm throughout.

After the highs of last week, their comments were particularly grounding; Len perhaps summing it up with “Cuban salsa… good, but no cigar.” Darcey said it was fast and plenty of fun… but messy and not hot enough. Bruno took issue with timing, but Craig, dear Craig said “there was no figure of eight in the hip action… and without it it’s a shimmy.” Oh dear. And his final seal of disapproval… “A dreadful, dreadful salsa.”

The scores then formalised things… 6 from Len and Darcey, 5 from Bruno, and a 4 from Craig giving us a very disappointing 21 and a crashing drop from last week’s top slot to second from bottom this week. Placed so precariously, we’d convinced ourselves the dance-off was unavoidable – I’m sure you could see it in our faces as the results were announced. Evidently we were saved by your good selves, the voting public, and for that we are tremendously grateful! Your votes not only succeeded in keeping us in the show, but also lifted us clear of the the danger zone! A huge thank you from us both!!

The dance-off this week therefore came as a great surprise to all: it was between Ainsley & Natalie, and Jamelia & Tristan, and just goes to show how important the viewers’ votes are. Both Ainsley and Jamelia danced with great gusto and delivered great entertaining performances, but the judges decided it was the end of the road for Ainsley. Now there’s someone who’ll be royally missed from the show; what a personality, and such a gentleman.

And with that, Katie and I dusted ourselves off and regained focus on the week to come. New week… new dance… and for your delectation this coming Saturday, Katie and I will be performing a Paso Doble, indeed with a Halloween theme! Trick or treat? Tune in Saturday!