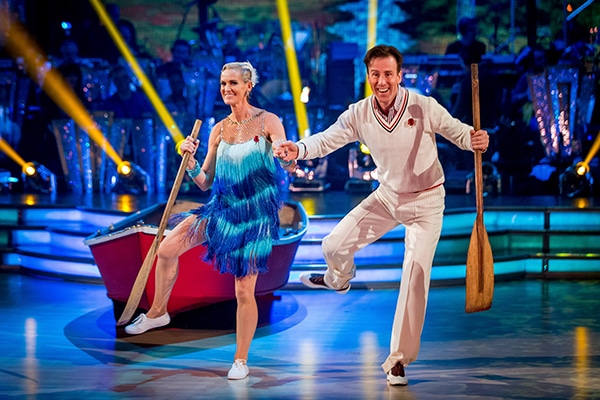 Were we up the creek with our boating-themed Charleston last weekend?…

I think not! What an improvement – Judy’s best dance to date in my opinion… full of animation, characterisation, big smiles and fun! After Craig’s comment about a ‘vacant expression’ last week, we knew we had to push the boat out… and that’s exactly what we did. Tremendous! Granted, there may have been room for more swivel as the judges were quick to spot, and any parts out-of-time were of course choreographed that way… (syncopation! ahem)… but the feedback, whilst not all plain sailing, came as a wave of positivity.

Len said it was joy to watch us, though Bruno said it was more like a Titanic of a Charleston… oh dear. At least Craig said Judy was far less wooden than the oars (there is a compliment in there) – even saying the performance was enjoyable (though sadly not reflected in his score). Darcey recognised Judy had turned up her performance – hurrah – and in fact, that’s the best kind of encouragement to receive from the judges: acknowledgement of improvement. Full steam ahead! However… this rising tide wasn’t reflected in the scores: 18 (including a 3 from Craig)… sinking us right to the bottom of the leaderboard by the end of the night.

This week’s dance-off was another shocker: none of us expected to see Thom and Iveta having to go head-to-head against Simon and Kristina. Both couples were superb, and the judges of course had a very onerous task of choosing who should leave the competition. It was so divided that head judge Len had to give his casting vote, saving Simon, and so losing Thom. It was very unexpected to see him leave so early in the competition after showing such promise; a real gent, he was a particular favourite of Judy’s too. Once again it just goes to show how much sway the public vote can have on the leaderboard.

It was a real boost for Judy to have her son Jamie there in the audience last weekend – she says she’s thrilled to have changed his opinion on her dancing from mortification to pride… and Andy should be there to cheer us on this coming weekend after his incredible win at the Valencia Open last Sunday.

We’re doing an American Smooth for Halloween week. Plenty of smoke and lifts. I can’t wait. Scary isn’t the word!