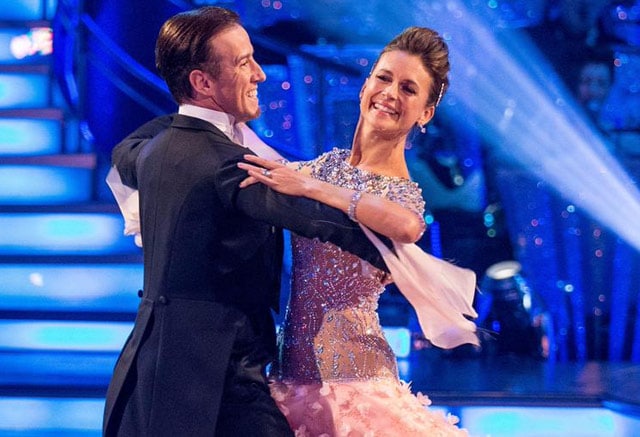 We’re back in the game! What a magnificent result last Saturday – Katie and I literally waltzed and spun our way to the top of the leaderboard, and it put us on top of the world, too!

Closing the show meant that we had waited anxiously all evening whilst all the other couples delivered some first class dances… But it was worth the wait: what a truly tremendous performance, my goodness! The perfect music (Presley’s ‘If I Can Dream’), two remarkable outfits which fitted the bill to a tee, and a sublime Viennese Waltz with which we were to enchant the audience.

We had a stylish opening section, both in sync as we addressed the ballroom, and then we took flight as we took hold of each other, gliding across the dancefloor with, to my mind, a real sense of grace and panache. Katie’s dress twinkled under the spotlights and our feet were a blur as we turned and spun… and spun some more. Boy, did we spin!

The Viennese, technically, has a somewhat restricted syllabus of steps, but that doesn’t mean it’s an easy dance – far from it – to master the flow and the spins – especially at speed, takes some doing. And that’s why I’m so very proud of Katie for delivering such a polished performance that night. To receive a standing ovation with a roar of applause from the studio audience gave us an inkling that it might have gone well… but it was only when the judges gave their comments did we breathe a sigh of relief, sure that whatever the score, it would be better than last week’s! In all honesty, we’d both worked our socks off to pack in plenty of content and we had everything crossed that we could pull it off.

It seems we had!…

Len was first to comment on the content – Fleckerls, natural turns, reverse turns, pivots… and he commended Katie on how she’d kept the pivots light. “So much better than last week,” he said… echoed by Bruno too, who said it was an “incredible turnaround from last week,” that Katie was “made for ballroom” and had been turning like a Catherine Wheel! Darcey referenced the level of content and that it was worth pushing Katie as it had paid off… and Craig… we braced ourselves… he’d spotted a couple of sticky moments, but that aside, said it was “Incredible,” and again to Katie’s credit: “I don’t know how you learnt that in a week!” Hurrah!!

The scores sealed it. Three 8s from the chaps, and a 9 from Darcey… 33 points – 13 more than last week!… And since we were closing the show we knew at that point that this wasn’t just a u-turn performance, hang about… we’d actually made it to the top of the leaderboard! Ballroom Blitz! There’s a first time for everything! @TheAntonDuBeke is top of the leaderboard! Well done @thekatiederham! #Strictly pic.twitter.com/kbsk5lU8Aj

I should point out, there was much conjecture over this being my first and only such placement in, ahem, 12 years, though this isn’t in fact the case. You may remember that I topped the leaderboard in the very first Strictly show, Series 1, Week 1, with Lesley Garrett when we scored 29 for our Waltz… then in Series 3 when Patsy Palmer and I Tangoed to the top spot with 34 points, and then most recently with Laila Rouass when our 31 point Foxtrot took us to the top. So, four times now, and Katie and I are in agreement that it’s rather a nice place to be, so we’ll be working on a fifth!

Although thrilled to be safe from the dance-off and through to dance another week, we were both truly sorry to have to say goodbye to the legendary Daniel O’Donnell. He and Kristina put up a valiant fight against Kirsty and Brendan but sadly their ‘Fly Me To The Moon’ routine had them make an untimely departure from the show.

And so, focused on the task at hand, we’ve been practising hard for this coming weekend’s dance. It’s the Salsa. Oh yes, Salsa. You’d best tune in!

See you on Saturday night my loves,