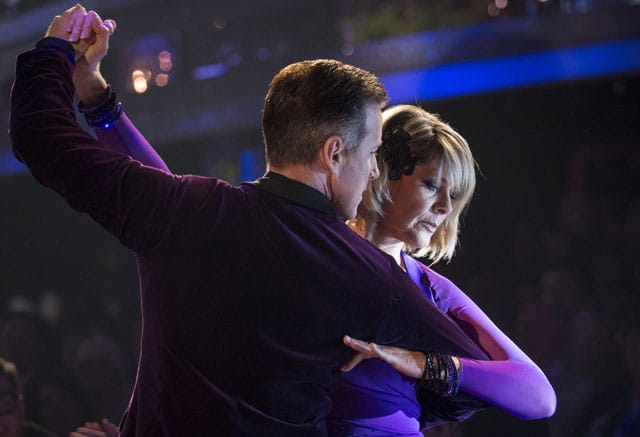 Week 4 and just 13 couples remain – unlucky for one, and after the nerves and low scores for our Rumba, Ruth and I knew we were very much on the back foot as, tickets in hand for a Venetian masquerade ball, we began to prepare for our Tango!

With Ruth’s busy TV schedule, we had our work cut out to master this dance in good time for the weekend. Like the Rumba, it’s a distinctive dance with particular frame, shaping, footwork, attack and characterisation to practise and perfect. But from the outset, I had an inkling that this was going to be Ruth’s dance: last weekend had brought about a change in her attitude, her determination, and her confidence… and a driven look in her eye. Applying this to the Tango – the timing couldn’t be more perfect.

Training went well all week: Ruth was loving the dance, and embodying the powerful, dominant female character required. She also began to experience the real thrill when steps flow – no longer looking down at her feet, she was able to move like a dancer. As the week progressed and our routine became more polished, I felt we could well be on to a winner! When the weekend arrived, however, the momentum we’d built up throughout the week was suddenly lost: the dress rehearsal went rather badly indeed. No doubt just a lapse in concentration, but a whole section of the routine was skipped. I knew that it would be an absolute disaster if that happened on the night, so you can imagine our trepidation as the countdown to showtime began and we waited nervously for our names to be called. I tried to reassure her that she knew the dance inside out and that it was all there in her head. It transpires that she gave herself a good talking to, which clearly did the trick…

Ruth was magnificent! Absolutely faultless – not even a foot wrong! Our tango was tremendous! It would appear, with hindsight, that Ruth was unknowingly exercising one of the traits of a true professional: holding something in reserve for the main show. Who knew?! Emerging from behind a mask in the Venice Carnivale in the smoky early morning light after a masked ball, the ballroom was our very own Piazza San Marco. As the pulsing strings from Karl Jenkins’ Allegretto drifted through the air, we were driven towards each other, interlocking, casting aside our masks and taking to the floor under the lights of the Rialto bridge.

Simply spellbinding – and with that tremendous staging, we couldn’t help but get into the character of the dance, embrace the drama and ‘passione’… and well and truly nail it! All helped, no doubt, by my wonderful velvet suit — worn especially for the event as I had an inkling this was going to be a goodie!

It really was Ruth’s dance – she performed it just brilliantly and I’m sure you could tell I was over the moon as the routine ended and we took our places ready for the critique.

We could barely believe our ears. Craig went first with overwhelming positivity (for him!): “That’s a bit more like it! … Pleased you’re making progress!” What a turnaround from last week – and from that starting point we hoped the rest would all be positive too. Darcey commented on Ruth’s determination, as well as some looseness in the shoulders, but said she felt she really was “in the moment”. Shirley delivered yet more praise: “100% improvement from last week!” She also spotted Ruth’s ‘fallaway whisk’ and said it was “amazing” – it’s always lovely to hear when those details are recognised. Even Bruno: “I can’t believe it – you didn’t go wrong once!” What simply glorious feedback… and what a huge relief!

When the scores came, sixes all round, we were both thrilled to bits. I was especially thrilled for Ruth as the comments, and 24-point total will have been a real boost for her – and a real sign that she’s improving. And not just that, we weren’t at the bottom of the leaderboard at the end of the night! Result! Before the final placings were revealed in Sunday’s results show, I had some particularly regal duties to perform in the wonderful group dance at the top of the show. I could quite get used to that throne!…

All hail Emperor Anton! But @CraigRevHorwood might have something to say about that thumb… 👎 pic.twitter.com/TjvXUjD8Ny

Back to the competition, and thirteen couples were frozen under the spotlights waiting to hear their fate. And, all thanks to Ruth’s wonderful performance – plus your invaluable votes – we were through to next week! Hurrah – our Tango was a triumph!!

100% improvement means a place in next week for @RuthieeL and @TheAntonDuBeke! Well done. #Strictly pic.twitter.com/0GbTyyoLse

Then came the sad moment that one of our celebrities would be going home. This week’s dreaded dance-off was between Davood & Nadiya, and Brendan & Charlotte – a surprise result for Davood who finished 4 places higher than us on the main show’s leaderboard. It just goes to show how unpredictable the final scores can be – and of course, how essential your votes are!

Both couples danced so very well, but one had to leave the competition and, unanimously, the judges saved Davood & Nadiya. Huge commiserations to Charlotte & Brendan – we’re all still marvelling how Charlotte managed to find the time to rehearse with her incredibly early starts and young family too. She’s very much missed already. I should also congratulate Alex & Gorka on their incredible performance: scoring 39 points week 4, that’s something quite remarkable! Credit where credit’s due, they’re a wonderful couple to watch!

For Ruth and me, it’s back to training with even more focus and determination to ensure we keep improving week on week. Things are really hotting up… not least as we’ve got the Samba!

Until the weekend, my loves,