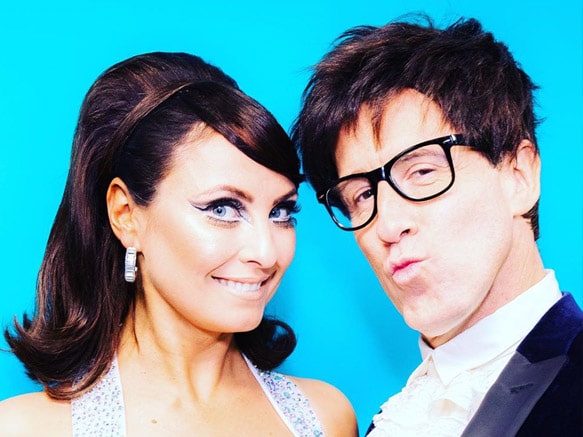 Well, where do I begin?! What a weekend – I don’t know what made more of a lasting impression: our snazzy psychedelic Salsa… or teethgate! Either way, Strictly Movie Week 2019 was surely the biggest blockbuster episode to date… and as for getting into character, I’d say ‘Mission Accomplished!’ – wouldn’t you agree?! Yeah Baby!

Strictly’s themed shows are always a favourite among us dancers, the celebs, and the production team alike. Not only are they great fun what with all the fabulous hair, make-up and wardrobe, they add an extra sparkle to the dances, an added dimension if you like – one which gives our celebrities an opportunity to connect more strongly to the audience. And in this competition, every advantage counts!

Of course, if your partner happens to be a professional actor, all the better!

From the moment we were told our movie – ‘Austin Powers’… and heard the music… ‘Soul Bossa Nova’, its fabulous theme tune – that was it, we were off! I challenge you to listen to it and not crack a smile and our week of training was simply a laugh a minute! We worked together on our routine, ensuring all the required steps were covered, but also that we were able to bring our characters faithfully to the dance floor. We had to channel them, embody them, fill the routine with groovy 60s salsa steps – and jump in with both feet!

Mind you, it wasn’t until the dress run that Austin Powers and Miss Kensington truly materialised on the dance floor (you can imagine), and I could tell Emma was in her element. Again, getting into character like this is such a good way to bring out our celebs’ inner dancer – it’s no wonder there was so many incredible performances that night! 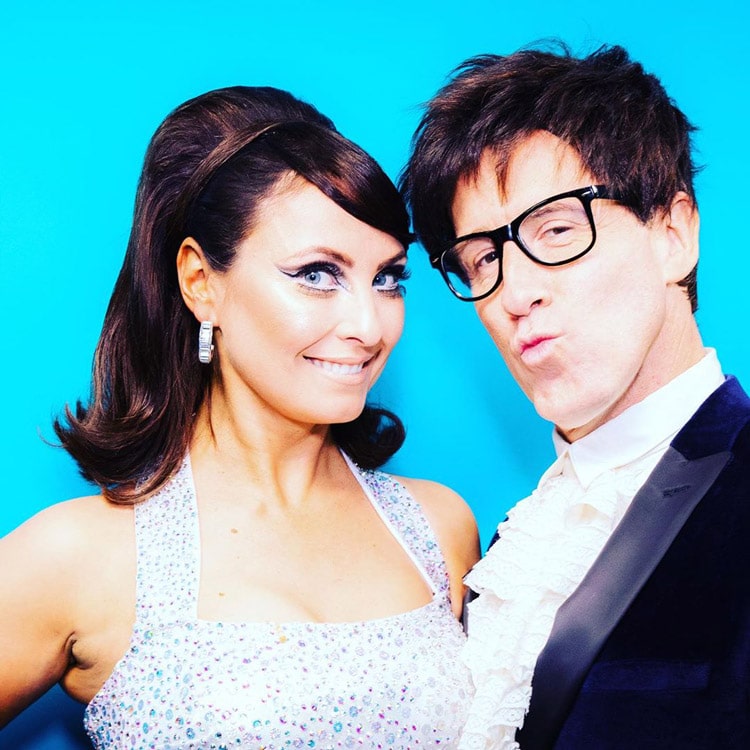 The first of which was the fabulous pro dance commencing with yours truly as ‘Mr Incredible’ – ah the type casting! What a triumph though, I hope you enjoyed watching it as much as we all did performing it! 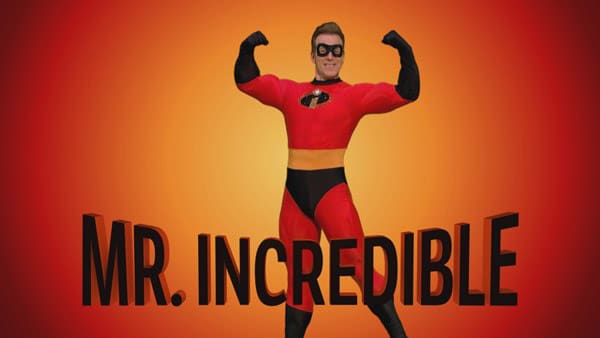 Now, the VT prior to our dance touched upon the nerves which crept in during last weekend’s Foxtrot, but this time we felt we were on a different footing. Not just because of the different dance and styling, but largely because our routine was so much fun that we both couldn’t wait to get out there and perform it!

The lights were dimmed… I lounged on a large pair of lips in my velvet and ruffles, and Emma, or should I say Mrs Kensington, gave the most marvellously slinky solo intro on the podium under the spotlights as those hypnotic Brazilian rhythms began.

How we kept our faces straight, to this day I do not know. A squirt of the ol’ secret weapon breath freshener, into positions, and we were off. What a hoot! All those trademark moves from the movie, not to mention the armography, our side-to-side synchro section, the lifts… and of course – the facial expressions! Just brilliant – pure exuberance! 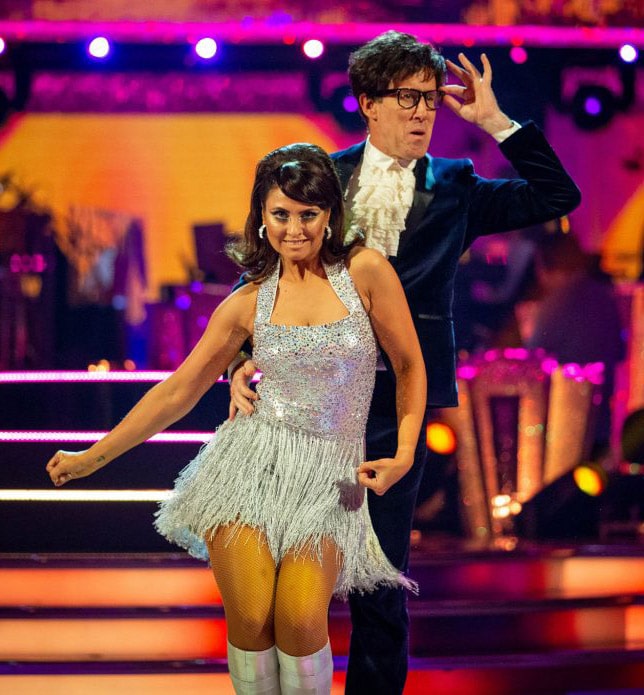 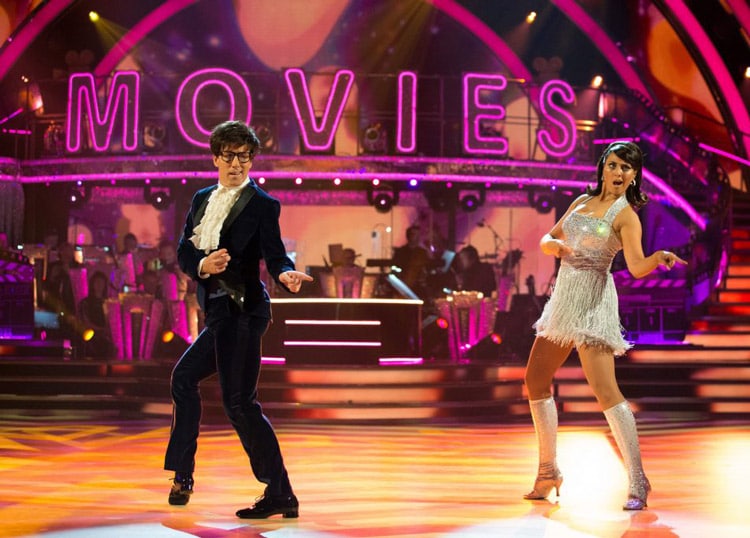 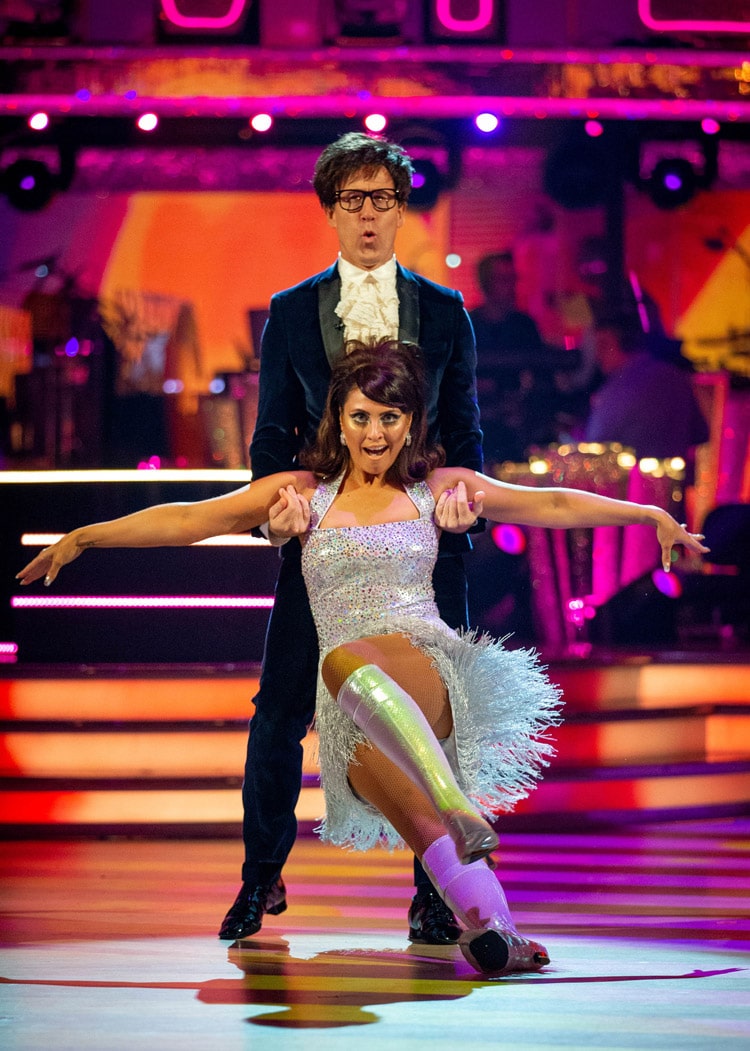 It was all over far too soon! The audience were on their feet… and even Tess couldn’t hold her laughter back, saying “pure perfection” as she handed us over to the Judges. “Hello,” I thought to myself, “we’ve done it!”

After last week’s memorable comments I had high hopes for this week’s critiques. Little did I know how even more memorable they’d be…

Shirley said she enjoyed it very much, admitting she’d presumed Emma would fare better in Ballroom over Latin – but she said the rhythm and rotations were all spot on! Bruno, once he’d got past my barnet, said Emma gave a stylish swinging 60s salsa – and that she could “Go for it, Honey!”

Craig – here we go – said he was distracted by my wig… and teeth! Hang about… the teeth were mine – not prosthetics! The cheek! I, ever the professional, thought it best not to make a fuss, live TV and all, but I was pleased that Tess stepped in to clarify and put Craig right on the matter…

‘They’re not fake?’ he said, now realising his mistake, and unable to hide his embarrassment! You see, I’ve always doubted Craig’s eyesight, given the way he marks, so this all came as little surprise. But that was it – Tess, the judges, and the audience all broke into fits of laughter. How I managed to maintain composure I do not know, save for the stinging barb of the insult 😉

The whole sorry affair has since been aptly coined ‘teethgate’ and has gone viral, as they say, on the internet. My orthodontist is furious. I console myself in that it’s most likely Craig’s apology being caught on film which had everybody clicking!

Motsi had a job to bring things back on track (whilst Craig wiped his eyes) but was thankfully complimentary – “You are fine… sensual… quality… push, push, push!”

On to the scores, and whilst Bruno, Shirley and Motsi all give us 7s, Craig only scored us a 6. You’d think his mark might have reflected some degree of remorse but alas, no – there was no getting Craig out of character this week! 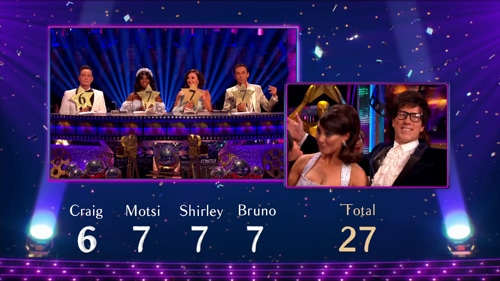 Still, 27! 3 up from last week, and keeping us steady in 7th place overall on the leaderboard. 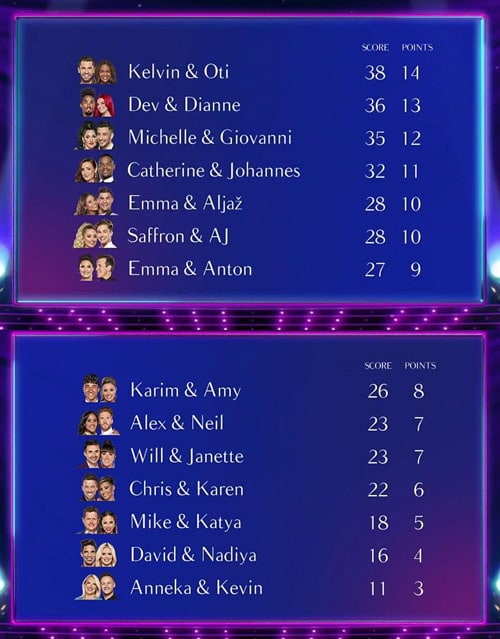 Even the Hollywood highs of Movie Week couldn’t keep the mood aloft backstage as the Results Show was upon us. Remarkably however, Emma and I were the first couple to be announced as safe! Now there’s a novelty!

Happy doesn't even cover it! @EmmaBarton and @TheAntonDuBeke are overjoyed to be through to Week Four. 🙌 #Strictly pic.twitter.com/QLlnDMGZwc

No such reprieve for Kevin & Anneka and, once again, David & Nadiya, who had to take part in this week’s dance-off. Even with the fabulous staging and costumes of Movie Week, the prospect of dancing their routines again was surely not relished by these couples. Despite both showing greater confidence second time around, the judges were unanimous in saving David & Nadiya, with worthy challenger, Anneka and reigning champ, Kevin, making an early exit. Looks like the hunt for the glittering treasure was a challenge too far for our lovely Anneka, who will be very much missed on the show.

Mention must be made of the fabulous performance by Harry Connick Jnr – ‘Anything Goes’ – to which Nadiya and I had the very great pleasure of dancing along to. Here it is again – enjoy!

And so, thrilled, delighted, and relieved, Emma and I embarked upon another week of training – this time, the Viennese Waltz – and if the footwork doesn’t put Emma in a spin, the spins will!

As ever, thank you all for your votes each week – they really do mean the world and are absolutely instrumental to us making real progress in the competition – we simply couldn’t do it without you!

Oh, and don’t forget to visit Anton & Erin – Dance Those Magical Movies for details of my movie-themed 2020 tour with Erin Boag – some fabulous photos too, Du Bond being a personal favourite!