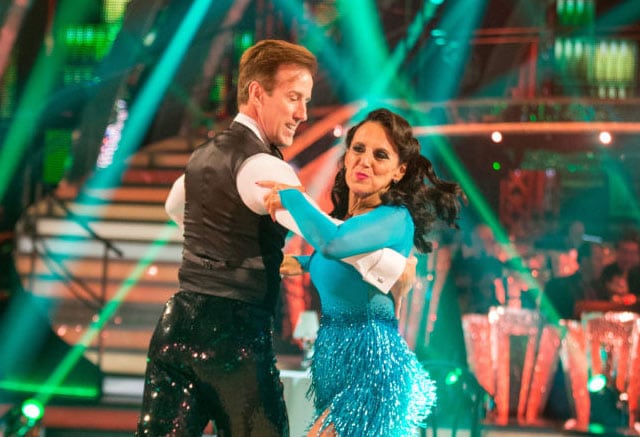 Well my loves, we’re off to a flying start, I’d say! Didn’t Lesley dance well? I was thrilled to bits on Saturday night – a complicated, fast-paced routine… with props too… and our scores are on the up – tremendous!

Whilst it’s always a challenge going from one week to the next for our celebrities in Strictly, having been immersed in the character, technique, genre and tempo of one dance performance to then put it all behind and start afresh, I’m particularly pleased with how Lesley’s taking to all this. To go from an inaugural Waltz to a week 2 Cha Cha Cha is no mean feat… but she’s taking it in her stride!

As for this week’s performance, we both took our character preparation very seriously, as some of that VT all too clearly showed!…

Our routine was set in a fine Parisien restaurant where our characters played out a matter of high class customer service: Lesley, intent on Champagne and asserting her territory across the dancefloor; I her humble waiter, at her beck and call! After a quick change of tables, and a dramatic rebuff or two, the floor was ours.

‘Perhaps Perhaps Perhaps’ was our song for the night, with Dave Arch’s Latin arrangement providing the perfect Cuban ambience and rhythm for our routine. Sass was essential and Lesley had it in spades. Remarkable hip action, demonstrative hands and armography (finding their way to my behind at one point, as Craig later lamented!)… and those legs… heavens above they worked hard! All to a fast-paced driving rhythm where precision and time-keeping were key… as well as continuing to keep in character all the while! As the music drew to a close, Lesley returned to her seat, threw her champagne sparkles aloft, gave me one final rebuff, and delivered a killer high-kick. Our dalliance was done, the performance was over, and so too my time as a waiter! (Mind you, I don’t mind mentioning, I did ask Wardrobe about keeping those spangly trousers!)

I’m sure you could see on both our faces that we’d thoroughly enjoyed the dance, and we so very much hoped the judges had, too. Darcey kicked off by saying all the right things… firstly complementing Lesley on how ‘absolutely amazing’ she looked, but going on to say “You’re sleek you’re cheeky, you’re flirty, you’re fun!… I loved it!” She mentioned balance issues arising from her free arm, and that’s something we can of course work on. Len said it was full of fizz and that it was a “proper Cha Cha Cha, lots of content… I thought it was terrific, well done!” Bruno said “the champagne had kicked in and Dorien Green is back – the original and best cougar… plenty of action in those legs; the legs were excellent!” Craig said he “wasn’t expecting that,” and that Lesley showed no sign of inhibition… but what really hit home was that he finished by saying “I could actually watch it again.” I don’t think any of us heard him correctly the first time, but my goodness me, there’s a compliment if ever there was one!

All that aside, the scores were relayed as follows: sevens from Len and Darcey, and sixes from Bruno and Craig. Total: 26. A much-deserved increase over last week, so progress indeed. With all couples having danced, the scores were added to those from last week to give a final leaderboard, and Lesley and I were thrilled not to be in the danger zone at the bottom! We knew that could all change when combined with the public vote so we were by no means out of the woods, but I think you can tell how pleased we were when the results were finally revealed on the Sunday night show…

[email protected] back at Lesley's beke and call next week #Strictly pic.twitter.com/d14qAjM5SM

For this series’ first elimination, it was Melvin & Janette and Anastacia & Brendan in line for the dance-off. Very unfortunately, things took an unprecedented turn as Anastacia was unable to dance again due to an injury sustained during rehearsals, exacerbated during the main performance. It’s no secret that Anastacia has beaten cancer a number of times and I’m sure we can all agree that her participation on the show is an inspiration to us all. And so, in accordance with the official Strictly Rules, the decision reverted to the overall tally of votes.

The result: first to exit this year was our newly resident DJ, Melvin Odoom and his partner, the lovely Janette Manrara. I’m sure the only time I didn’t see him with a grin on his face was during his Tango, and with two fabulously entertaining performances under his belt, I do hope he keeeeeeps dancing!

This coming weekend is Movie Week. Lesley’s thrilled to be dancing to a ‘theme’. We’ll be a Couple of Swells… I can’t wait to see her face when she sees herself all made up and in costume!