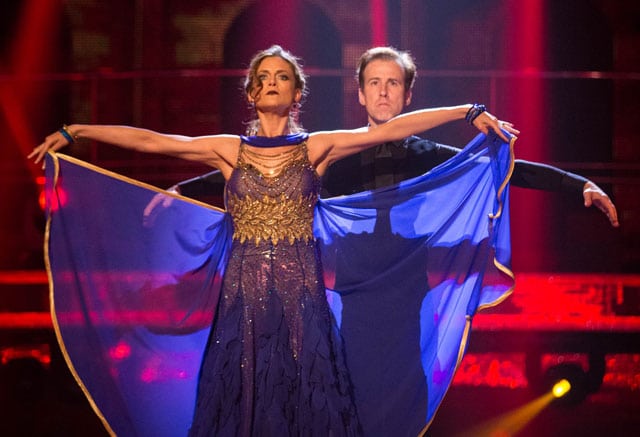 Merry Christmas, my loves! I hope you’re having a tremendous festive break wherever you are and whatever you’re doing. I wanted to do a final check-in before the end of the year to recap the Grand Final, to thank you all for your support over this series, and to wish you all well this holiday season!

What an adventure the past few months have been! Strictly 2015 is now over, I made it to the Grand Final with my wonderful partner Katie Derham, we had an absolutely incredible journey week-on-week, and I’m delighted to say a very worthy winner won!

What’s most important to Katie and me is the endless support the voting public has given us throughout our thirteen week journey. We are both fully aware that without votes from our fans, we wouldn’t have made it half as far, so a huge Thank You one and all!

That we made it to the final is such a achievement for me personally after all these years in the Strictly competition, and as mentioned in my last post, it’s really been a grand team effort between Katie and her full-on determination and enthusiasm for each dance, and your support in appreciating our efforts. Everything clicked this series, in first rate style!

But what a Final… what Finalists! Each couple had to prepare three dances for the night: one selected by the Judges as one they’d like to see again from earlier in the series to show how building confidence and experience has helped to iron out mistakes and improve the performance; then our freestyle Showdance – an anything goes affair… and then after the first elimination, a dance of our own choice.

Our Judges’ pick was the Quickstep to ’42nd Street’ from week seven where we scored 26 points. Katie had come a long way since then and we were keen to show this progression. Hats off to her (literally, see below!) for accompanying me on a whistle-stop tour of the ballroom. Speed, accuracy, footwork, performance level (particularly where props are thrown into the mix) were all greatly improved and I felt she delivered a seriously good dance. Flair and panache in spades, I say. Hats off to Katie for an incredible #Strictly props recovery! 🎩😊 #Strictly pic.twitter.com/ncyLEHuJXk

We had huge grins on our faces as the music ended, and the audience appeared to enjoy it too. As for the judges?… Let’s not forget, marks at this level are docked for mistakes where the expectation is perfection, so they were right to point out a slip here and there. But Darcey said we did a ‘great job,’ Len said he loved her posture and upper body when she danced, Bruno reprised his car analogies complementing her upholstery and suspension of all things (!), and referenced a few bumps in the road but that they were covered up well. Lastly, Craig flagged a few things but did at least say it was a ‘major improvement on the last time’ – and that was simply wonderful to hear.

Going last in the running order whilst inflicting an agonising wait does at least let you know where you stand when the scores are in. Darcey, Len and Bruno each gave us an 8 for which we were very pleased indeed, and Craig gave us a 7, so our total for the first dance was 31. This placed us squarely bottom of the leaderboard. Not the best place to be, granted, but all was not lost with another dance to come.

And then it was time for the Show Dances. This had been a very long wait… a thirteen series wait! The rules… there are no rules! Anything goes!

We had just the best piece of music for the job at hand – Carl Orff’s ‘O Fortuna’… such drama, such intensity… the perfect complement to a what had to be a showstopping routine. Transporting us to ancient Rome, the BBC had recreated a scene from the Coliseum, and were ready to make history… a minute and a half of it!

Our routine packed it all in – tango-inspired, it was choreographed to thrill, particularly with the most death-defying lifts and drops – such utter bravery from Katie as she fell backwards into my arms from standing at the end of the routine… what a gal! Epic, indeed!

.@theKatiederham & @theAntondubeke are ON FIRE! 🔥🔥🔥 But will their #Strictly journey end in a blaze of glory? pic.twitter.com/Snir1kE5b0

I thoroughly, thoroughly enjoyed it and we both knew that we’d given it our all, without doubt. The crowd roared and rose to their feet!

The Judges overall were positive, but sharp-eyed as ever. They referenced the responsibilities of working with such a huge classic piece of music, but that we carried the story beautifully and gave it a good go. It didn’t particularly work for Craig, worse luck, but to his credit, he rounded up his comments saying that Katie could rest in the fact that she’d done herself proud and given 100% to drive the dance home. Fair play, and I was so pleased to hear Katie’s hard work being acknowledged.

An epic showdance. Was @thekatiederham your Roman Goddess of the dance floor? #Strictly 3⃣1⃣ pic.twitter.com/a2wYbQQBVe

With some trepidation we made our way to the Clauditorium to receive our scores. Consistency appeared to be our new theme… a seven from Craig and three eights from Darcey, Len and Bruno giving us another 31. Consistent too, in the fact we remained at the bottom of the leaderboard. All couples were then on tenterhooks for the next hour whilst we waited for all your votes to come in and be counted and verified. It felt like the longest time! Then all of a sudden we were back on the dance floor, under the spotlights once again, and about to learn who would be the first couple out. After a reprise of all the dances on the VT, and seeing how incredibly and impeccably the other couples had performed… particularly with all the 10s that were scored, it came as no real surprise when Tess announced our names. We were out… but let’s not be downhearted about this… we reached the Final… and finished in 4th place overall… A tremendous result, truly!!

Katie gave the most lovely summary of her time on the show and it really brought home what a wonderful journey we’d had, and in the broader view, simply how much enjoyment dancing can bring! What followed were the most wonderful three performances by three superb couples. Jay & Aliona’s Paso, Giorgia & Giovanni’s Charleston, and Kellie & Kevin’s Charleston. Pure joy to watch – technically perfect, performance level through the roof, and these were quite clearly the right couples to have made it through to the very end. Any one of them could have won and I wouldn’t be surprised if there was a hair’s breadth between the final tally of viewer votes – I’m sure the Judges were relieved it wasn’t their decision to make!

And so, our three couples took their places in the final line-up, the studio lights dimmed, spotlights focused in, and the results music started to play. You could have heard a pin drop!

“And the winners of Strictly Come Dancing 2015 are…” announced Tess, with the required dramatic pause… “Jay and Aliona!”

Roars and applause erupted from the entire studio audience, and no doubt millions of viewers at home too!

Worthy winners indeed, and I’m so very thrilled for them both! Not least Aliona – this being the second time she’s won! Huge congratulations for a very well deserved victory! And so my loves, that brings us to the end of my running commentary on Strictly 2015 for me and my wonderful partner, Katie Derham. We both want to thank you all so very, very much for your support and votes along the way – to have made it through, week after week (and in some cases against the odds!) is purely down to our fans and for that we are extremely grateful and we hope that we continued to entertain right until the very end!

A huge round of applause to you all!

I’ll sign off now, but wanted to wish you all the most loveliest of festive breaks, and to send you all my very best wishes for the New Year to come.

With love, as always,