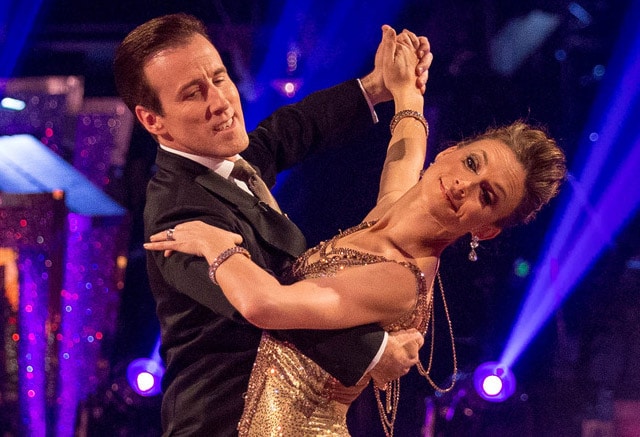 What a weekend! What an unprecedented weekend! I do believe I’m still getting used to the notion of being a Finalist… hang about, let me say that again… ‘Being a Finalist!’… that’s better… but let me tell, you the rigours of this past week’s training leave me in no doubt that Katie and I are giving absolutely all we have to make our last Strictly dances real showstoppers.

But first, last weekend: the Semi Final was a weekend of lows and highs, there’s no mistaking. With two new dances to perform it had been a particularly full-on week, but exhilaration won over exhaustion, hands down – this is a ride none of us want to get off!

…and then as time marched on, it was a quick costume change back into our Charleston get-ups and a few last minute moves before we took to the floor and opened the show with the first of our two dances for the night. Charlestons are such great fun to dance, as I’m sure you can imagine, but they do take boundless energy and sharp-as-a-tack timing to keep them looking slick. They have to be entertaining, first and foremost, and to transport you to a carefree time and place where anything goes…

…Katie’s dress did that for me for a start! Magnificent… tassles aplenty! Perfect for her figure… and of course for the character of the dance. No doubt the costume department included braces with my outfit to prevent any wardrobe malfunctions what with all the leg action involved! Our dance was fast and frenetic – perhaps the fastest tempo of all our dances so far, and was set to ‘Too Darn Hot’ from that classic musical ‘Kiss Me, Kate’. Very apt song choice once again… boy was it a workout!

We went for it, and Katie danced up a storm. With the Charleston, not only is there so much content to learn, but the timing aspect is particularly crucial here: the dance contains lots of side-by-side sections which not only require the moves being perfected, but the two dancers must be in sync too. On top of that, there’s all the characterisations and doing one’s best to present real personality, and indeed comedy, in the performance. There’s a lot to concentrate on, without looking at all like you’re concentrating! No mean feat.

I thought Katie delivered a tremendous Charleston, one she should be proud of – not to mention taking some dare-devil lifts and drops in her stride – and both of us had an absolute ball dancing it. The Judges, let’s be frank, didn’t share our exuberance. Len said “The song was hot, you looked hot, the dance was not.” Ouch! He went on to say, “It was a struggle, not slick enough,” and that we were outside our comfort zone; he said it wasn’t our best moment. Bruno used the phrase ‘Loosey Goosey’ and demonstrated with his arms; it seems this wasn’t a positive comment! Craig held nothing back, saying “The swivel was non-existent, awkward, too placed, stiff-looking at times… kicks out of time. Had better hope your next dance is perfect.” But at least Darcey brought some positivity by saying “It was absolutely charming,” though went on to say that the energy faded and we got out of sync.

Well, that hadn’t gone to plan! The scores kicked off with a 4 from Craig (yes, there were gasps all round) and sevens from Darcey, Len and Bruno for a total 25. And after the other four competing couples had danced, we’d landed at the bottom of the leaderboard with a resounding wallop.

I said to Katie to forget the first dance and focus on the next – we had a Waltz and it was set to the beautiful aria ‘O Mio Babbino Caro’ from Puccini’s ‘Gianni Schicchi’ – a timeless classic, and all the right ingredients for a performance surely capable of keeping us in the running.

…And we so very nearly nailed it!… Katie was a dream partner for this dance – her frame, her lines and shaping, her musicality, and the simply delightful way she moved around the floor with such a degree of ease and sophistication made this a very special dance for me. I must also mention the incredible job Hayley did of performing this soaring aria. Like I said – it had all the ingredients to make magic. Admittedly, there were a couple of slight departures from the choreography to keep us all on our toes, and, this being the semi final of course, were what the Judges homed straight in on.

Back for round two, we so hoped this wouldn’t be a knock-out. Bruno kicked off by saying “To capture the power and beauty of Puccini’s divine music through dance is a tall order – the phrasing and emotion you have to portray has to be perfect… and it wasn’t.” After Craig’s ‘4’ in the past round, hearing this, I felt that our fate was sealed. But then Craig stepped in and said “I totally disagree with Bruno, couldn’t disagree more… I really enjoyed it and thought you redeemed yourself.” Well, well, well… maybe all wasn’t lost after all!… Darcey kept our spirits up, too: “You did such a better job in this, well done, you’ve done wonders with your ballroom…. Overall a lovely dance.”

Len’s lens saw things differently; he said “It was nice to see something quiet and understated, but that a waltz is slow and needs great control… unfortunately you somehow got on the wrong foot and that created mistakes… This is breaking my heart, I know it’s breaking yours. It was just unstable and I’ve got to say that. I’m sorry.”

All respect to Len for the honest feedback, of course… feedback, as it transpires, that would stand us in good stead.

Somewhat crestfallen, we headed up to the Clauditorium with less than a spring in our step. The scores were good, in fairness: sevens from Len and Bruno, an eight from Craig, and a very gratefully received nine from Darcey. Total: 31. Position: bottom of the leaderboard! We knew the dance-off would be an inevitability – the standard of all the couples being so tremendously high, particularly this series – so it came as no surprise when we were plunged into the dreaded red light in the Results Show.

We were pitched head-to-head against the incredible Anita & Gleb who chose to reprise their Salsa. We were prepared for this… we’d had opportunity to steel our nerves and focus on delivering a faultless performance. We elected to Waltz for our place in the Final, we knew we could do it justice. But would it be enough?… Pitched against such a fast and athletic Salsa, we had to hope that technique would see us through.

We waltzed as if it was our last. The Judges’ feedback rang in our ears as we focused on phrasing, balance and footwork. We followed the natural rise and fall of Puccini’s beautiful melody, driving through the spins to build momentum and lift the dance …it all seemed to click into place. We had done all we could. But so too had Anita and Gleb.

Katie Derham and Anita Rani are dancing for their place in the #Strictly Final. Who would you like to go through? pic.twitter.com/x1XL37UaAb

It all came down to the Judges opinions: Craig saved Anita, but Darcey saved us… then Bruno saved Anita… meaning it all hinged on Len’s vote. And we can only presume that technique ultimately won out, as Len miraculously saved us!

We were through!… To the Grand Final!!!!

It was a incredibly bitter-sweet moment though, as we had to say goodbye to Anita & Gleb – a fantastic partnership with some mesmerising performances under their belts. At this stage of the competition with Judges looking for mistakes in order to separate the couples, simply having the wrong dance in a crucial week can spell one’s downfall, and I believe we were lucky with our Waltz. Anita and Gleb have been wonderful competitors, and I truly hope Anita keeps up the dancing – she’s a born natural!

And so, the Grand Final of Strictly Come Dancing 2015 beckons… and Katie and I are in it!!! It’s been a long time coming, and I am beyond ecstatic – Katie too! I’m as proud as can be of her – she’s done so very well, working tirelessly each week to give her all to each dance and this just goes to show that hard work and dedication really does pay off!… Dreams can come true!!

Being in the Grand Final of course means… Showdance …my first Strictly Showdance, ever! As Katie said on It Takes Two, I’ve been cramming 13 series’ worth of choreography into one and a half minutes of ‘O Fortuna’. We’ve had a very busy week as a result, and it’s going to be a belter of a Saturday night… just you wait and see!

My wonderful professional partner, Erin Boag, will be live-blogging the final over on bt.com, so you can follow her expert opinion throughout the evening at this link.

Once again, and as always, a huge Thank You for your votes. Don’t let them stop now though: the result on Saturday is purely down to the public votes so every last one will count. I can hardly believe it… the Glitterball Trophy is at last within reach!

See you in the Grand Final, my loves,