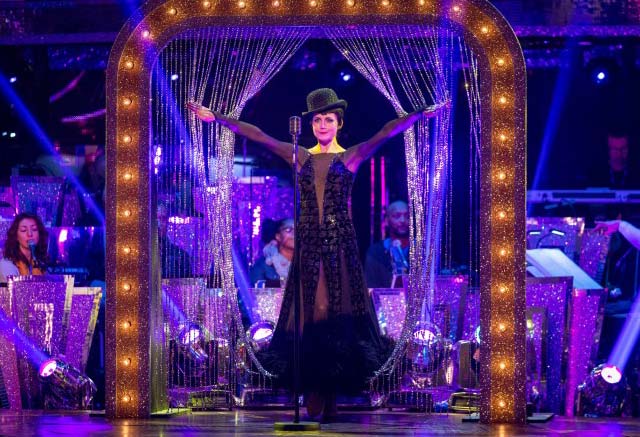 Week eleven… the quarter finals… dancing in December… who knew?! This series of Strictly has really taken a turn, and I am simply overjoyed to still be dancing each weekend! All credit where it’s due of course: Katie has proven to be the most wonderful, and crucially, talented partner – and of course, our fans and the voting public have helped keep us in each week (we all know how the leaderboard can turn on its head!). Truly a team effort all round!

So, after the rigours of the week 10 where we had two dances to perfect, you’d be forgiven for thinking we could take it a bit easier… not so! Everything is ramping up week-on-week, and this was no exception. We had the most marvellous theme to work with: ‘Musicals Week’, and as production levels went through the roof, performance levels had to, likewise!

‘Cabaret’ was our musical, and we were to dance a Foxtrot to the wonderful emotive ballad, ‘Maybe This Time’ – perfect choice, on so many levels! Hair, make-up and costumes did another inspired job on Katie, transforming her into Strictly’s own Liza Minnelli as she emerged through the silvery curtain at the top of the number, stepping onto the stage as though channeling the fabulous character, Sally Bowles. We were at once in early 30s Berlin with the studio transformed into the infamous Kit Kat Klub… Welcome to the Cabaret! Katie set the scene with a confident introduction section, starting with a wonderful swaying move with our backing dancers before descending the steps to the dancefloor where she gestured over to me. Resistance was futile, of course, and we took each other in hold and thence to the floor. What followed was, for me, a triumph. The foxtrot as you may well know, is my favourite of all the dances and that made this week’s performance all the more special. Katie had such grace, such style, such sophistication, such long flowing moves as we covered the floor. The promenades, turns, her kicks, and the pivots – the choreography and drama building with each key change in the music.

Performing it felt like one of those numbers where everything comes together in a way you can’t predict but can only hope for, and it creates a ‘moment’ between you and the audience. I was Cliff Bradshaw to her Sally Bowles. The finale had Katie return to the stage, recreating that iconic pose on the chair whilst the audience rose to their feet. Tremendous! The judges, I am thrilled to say, loved it too! Len said the intro was a bit long, but worth the wait… and then complimented Katie on “fabulous movement, beautiful lines… a very, very accomplished performance.” Bruno compared Katie to a classic luxury sports car, “trixie but under expert guidance able to give a fantastic ride. Beautiful. Once you started moving: stunning – it was a beautiful dance.” Craig, wait for it, said “It looked very good,” and he even said he “loved the choreography,” ending with “I thought it was really, really lovely.” Hurrah!! Darcey summed it up by saying “Katie, that’s exactly what we want from you – the confidence you oozed, it was brilliant.” My sentiments exactly!

The scores cemented my delight – an eight from Craig, and nines each from Len, Darcey and Bruno. Nines! Three of ’em… getting to be a regular occurrence! We totted up a grand score of 35 – matching that awarded our American Smooth in week 9, and still my highest ever on Strictly. We were beside ourselves! By the end of the night, we placed 4th out of six on the leaderboard. We knew that everything could change with the viewers’ votes, but I think given our reaction on the Results Show, you could appreciate just how surprised and delighted we were to make it through. Thank you all so very much for your votes and continued support… it’s keeping us in the show!

There was a bigger surprise to come: the dance-off pitched Helen & Aljaz against Georgia & Giovanni who had placed second on the leaderboard. This was very unexpected, and served to drive home to us all how quickly our place on the show could be lost. Both couples danced incredibly well, yet again, and I don’t envy the judges having to make such a difficult decision. They saved Georgia & Giovanni and so we all bade a moving farewell to lovely Helen & Aljaz after their epic ‘Les Mis’ number. None of us expected that, and Helen is very much missed already as our Strictly family gets ever smaller.

I can’t quite believe I’m saying this, but we’re all set for week 12… the Semi Finals!! The Semi Finals!!! We have two dances to perform this weekend: a Waltz, and the Charleston. Something of a polar combination, but a great way to showcase Katie’s growing versatility and showmanship. We’ve got some wonderful music to dance to, too, so we’re both looking forward to a very exciting weekend!

Hats off to you all, my loves, and see you on Saturday!