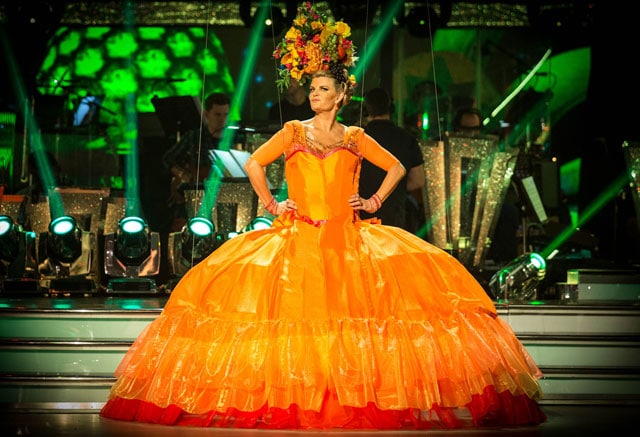 I couldn’t possibly have imagined a more flamboyant start to Strictly 2018 for Susannah and me… You might have thought we had an inkling when we heard the producers’ choice of music for our inaugural routine… but it certainly took on a life of its own when the choreography was combined with the costumes! This fruity samba to Carmen Miranda’s Tico Tico was always destined to be a memorable number — but unfortunately it wasn’t the only memorable number for us on the night!…

I shan’t reveal whose idea it was for me to make my entrance from secret doors in my partner’s skirt, but it was clearly inspired. I’ve never known anything like it! Another first for Strictly – as indeed, was dancing a Samba in week 1. 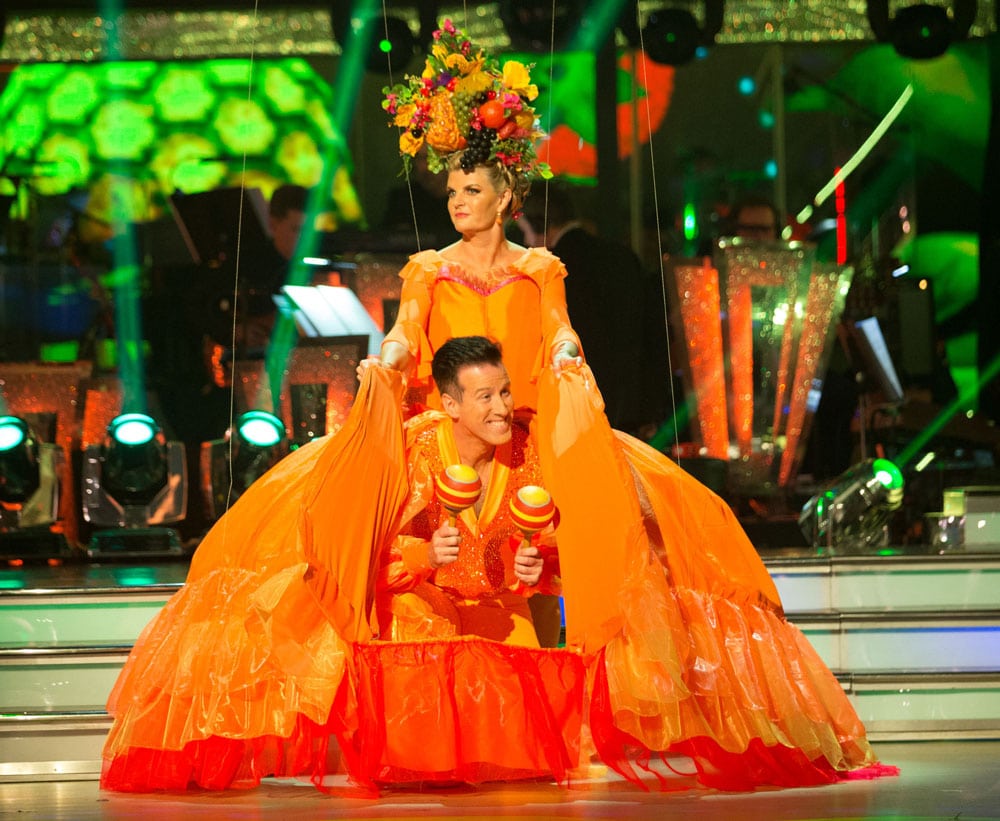 To tackle the samba as an introduction to Strictly is undoubtedly a baptism of fire. Just when your partner starts to believe they have some mastery over the steps and a feel for the performance, it can all be undone by nerves and the pressure of delivering such a fast, high-energy dance. It’s understandable, as I’m sure you’ll agree, that nerves may have got the better of Susannah at times in terms of recalling the steps, but those very same nerves have surely now been steeled by the experience.

I happen to think Susannah did tremendously well for a complete novice and a debut dance like that. She delivered a good number of basic steps – at speed, too: whisks, voltas, the corta jaca, promenade runs; and whilst of course there’s room for improvement, this was week 1 – it was all about her finding her feet and getting a performance under her belt. 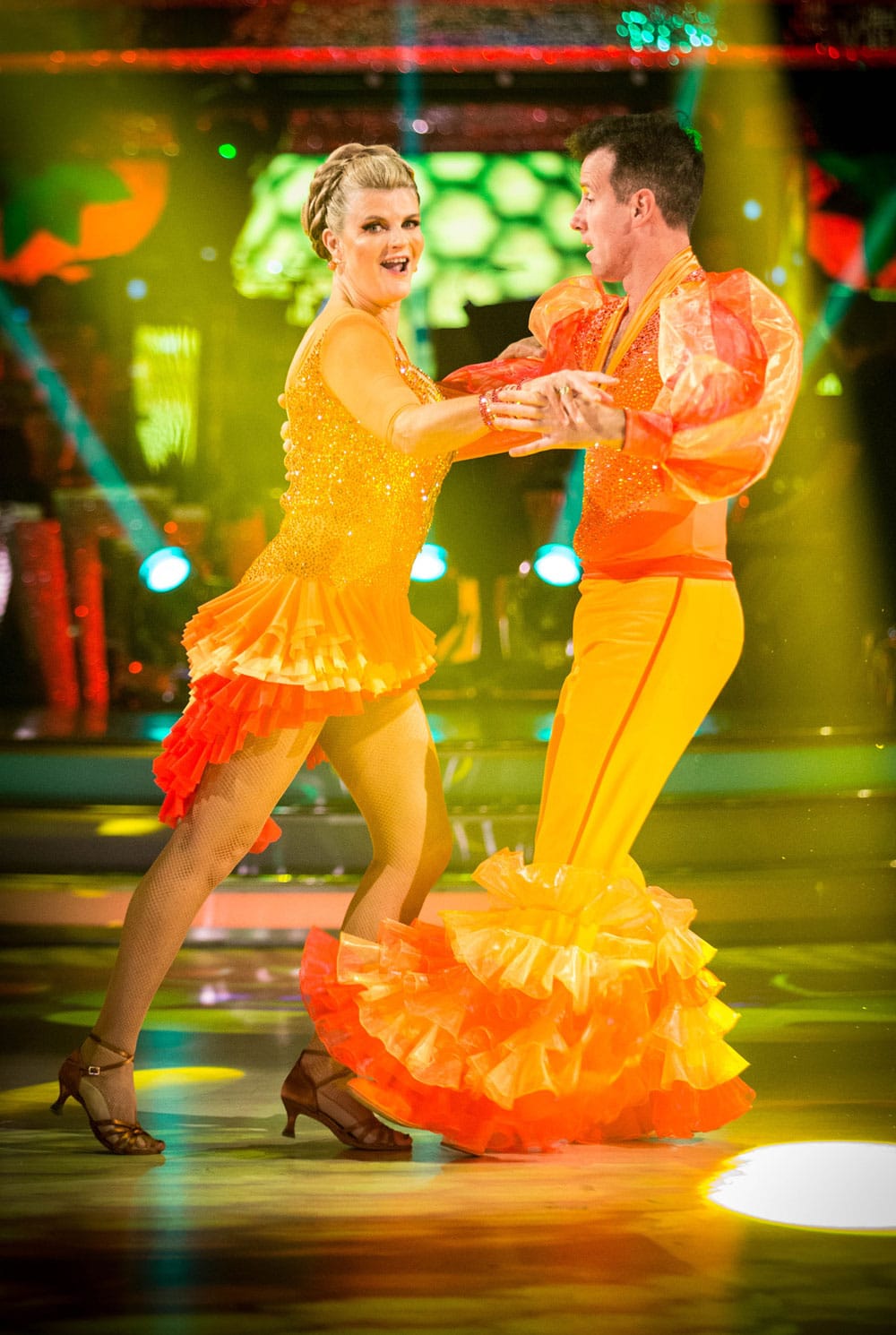 Did you spot the stray maracas on the dance floor throughout (ah, the joy of props!) – it was a bit like dodging giant marbles at times, so how that didn’t put us both off I don’t know! I’m not sure I could actually see my feet or the floor for that matter will all those leg frills!

Hats off to Susannah though for getting through the dance in grand style – and reaching the floorspin finale on time too – no mean feat. For me, it’s a clear indication of her determination, her enthusiasm and her ability – I’m also mightily encouraged by the fact she’s proving to be a rather good mover! 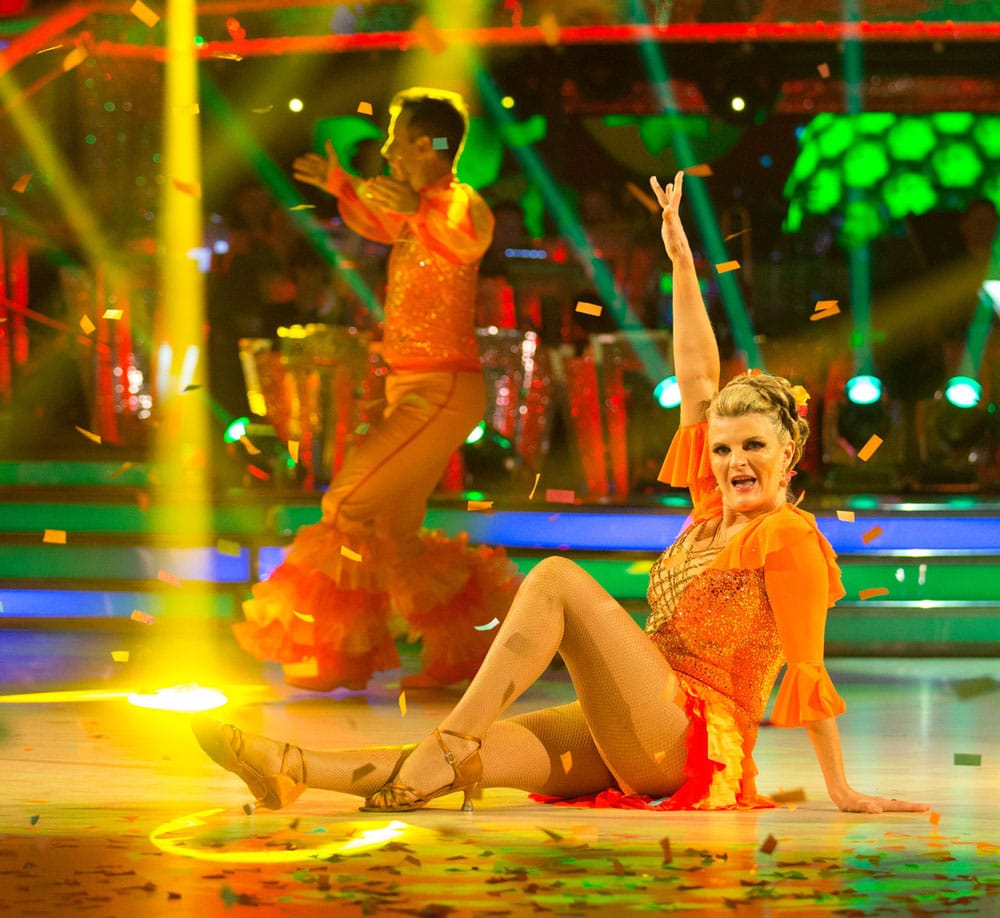 Of course, the judges took a direct line with their critique… though I’m pleased to say Darcey and Shirley both saw not just the entertainment value, but also the potential in Susannah – hurrah – “A dancer trying to come out,” said Shirley – quite right! She also made mention of the technical content too – and the speed at which it was delivered; I was pleased for Susannah to hear these things referenced, credit where credit’s due.

More deflatingly, Bruno coined the routine ‘Car Crash Miranda’ not Carmen Miranda, and Craig said the best part was the floorwork at the end (or rather, words to that effect!).

Duly, when the scores were announced, we knew where we stood. A ‘1’ from Craig. Boos and jeers erupted from the audience, and I must admit we were taken aback by such a low score. My goodness, I haven’t scored a 1 since Nancy Dell’Olio (our week 1 waltz scored 12 points again with a 1 from Craig). Susannah was pragmatic and said it could have been worse if we’d received a 1 from each judge, but at least the 3 from Shirley and 4s from Darcey and Bruno bolstered us to a round dozen. It placed us bottom of the leaderboard though… obviously not the soaring start we were hoping for, but looking on the positive side, the only way is up! 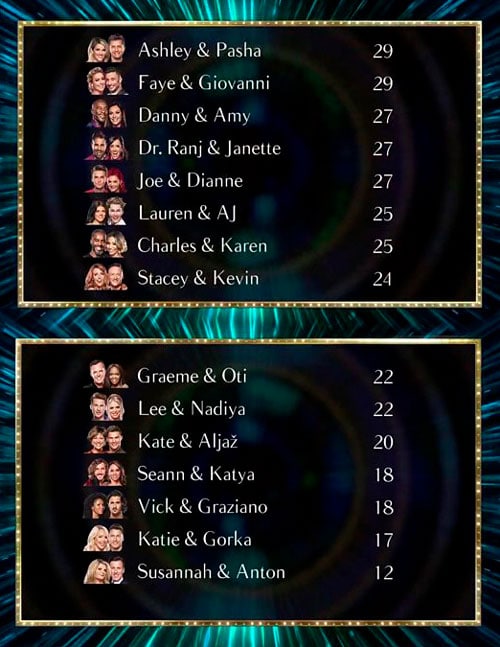 With training almost complete for our Week 2 Foxtrot to that Sinatra classic ‘They Can’t Take That Away From Me’, we’re on a roll, just you wait and see! Tune in to BBC1 at 6:30pm on Saturday and watch us make a comeback! Don’t forget, the voting opens this weekend too, so we’ll be counting on your votes to help us through to week 3!

…Your support, my loves, is always appreciated!

Meanwhile, there’s still time to be in with a chance of receiving a beautiful printed sample chapter from my upcoming novel, ‘One Enchanted Evening’. Head over to Facebook and comment and share this post to enter the random draw. There are 50 sample chapters to give away! Deadline is midnight tonight though, so be quick!

Until the weekend!
Much love,