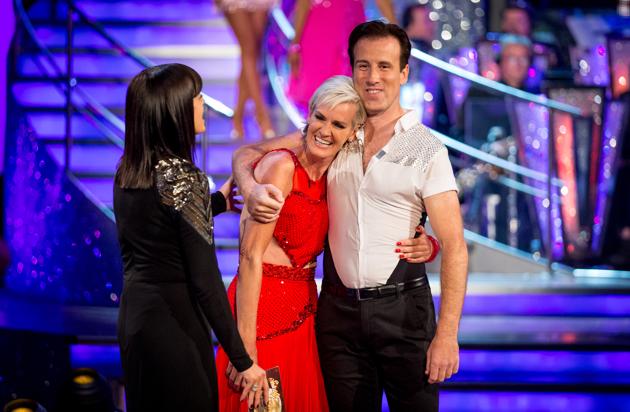 Strictly Come Dancing is back!… And for its twelfth series, no less! Each year the show becomes more spectacular than the last, and this series will knock your socks off – of that I’m sure!

Did you see the Red Carpet launch show last Sunday evening? Delighted to have Sir Brucie start the proceedings – ‘Nice to see him… to see him… Nice!’ – to coin his own catchphrase. What a gentleman, what a star. He handed over his presenting reins to Claudia alongside Tess – a captivating and amply capable duo to lead us through the coming months of this thrilling competition. They began their duties with some very important matchmaking…

I’ve been served an Ace! I am honoured, and very excited, to be partnering the rather remarkable Judy Murray! Judy is a highly influential figure in the world of Tennis, her career spanning several decades. She’s the Fed Cup Team Captain, has 64 coveted trophies under her belt, and of course, she’s also Mum to international Tennis stars and former Wimbledon Champions, Andy and Jamie Murray too! I’m all for an athletic partner – dancing’s an energetic business after all – and Judy’s coaching skills and mindset are going to stand her in good stead. She’s right on the ball with her strategy of approaching each round at a time – her philosophy for tennis tournaments being to “focus on what’s in front of you at the time and not look too far ahead.” Marvellous!… I’ve met my match! Judy has long been a fan of Strictly and says that she was ready to do something completely different, wanting a new challenge. Who knows… I could have a Strictly champion in my hands; at the very least I’m hoping we won’t be ‘out’ too early on. With a great competitive edge, and a wonderful sense of humour, we’re sure to bring some top-spins to the dancefloor; Judy is very excited indeed!

Serious training is now afoot before the live shows begin on the 26th September, so make sure you follow our progress with snippets, photos, and gossip from the rehearsal rooms on Twitter and Facebook… and be sure to follow Judy’s moves on Twitter too.

From Centre Court to Centre Stage… let’s hope Strictly Series 12 brings out the Ten in Tennis for my new Belle of the Ball!